Chattogram Challengers are expected to win this match.

Chattogram Challengers and Fortune Barishal will play the first match of the Bangladesh Premier League on January 21. Both the teams are yet to win the tournament and hence, will try to gain momentum right from day one. CCH finished in the third position during the last season but was defeated during the second qualifier by the Rajshahi Royals.

Fortune Barishal is a new franchise that will make its debut this season. Fortune Barishal was a franchise that represented the Barisal Division until the 2016 season of the BPL. FBA has some of the biggest names of T20 cricket in their team including the likes of Shakib Al Hasan, Chris Gayle, and Dwayne Bravo.

The pitch at the Shere Bangla National Stadium has enough support for the batters during the initial phase of a game. In the later phase, spinners start receiving enough help from the pitch. Hence, batting in the second half is a bit more difficult than in the first half. The team winning the toss should look to bat.

Kennar Lewis will be making his BPL debut this season. He has been playing in the T20 franchise for a long time and has earned a reputation of a big-hitter. In the CPL 2021, Lewis made 195 runs off 117 balls in the powerplays at a strike rate of 166.66. He played a significant role in the Lanka Premier League as well as T10 League.

Shakib Al Hasan can do everything that is possible on a cricket field. He would be leading the FBA team in the tournament and hence, will be a key player throughout the season. Hasan would be playing a T20 game for the first time since T20 World Cup 2021. He picked 11 wickets in six matches during the T20 WC at an average of 11.18, an economy of 5.59, and a strike rate of 12. With the bat, Shakib made 131 runs at a strike rate of 109.16.

Chris Gayle has been featuring in the BPL since 2012 and FBA would be his seventh team. Gayle has made 1482 runs in 42 matches in BPL at an average of 41.16 and a strike rate of 156.49. He has hit five centuries and five half-centuries in the tournament. Gayle is the only batter to hit over 100 sixes in the tournament. 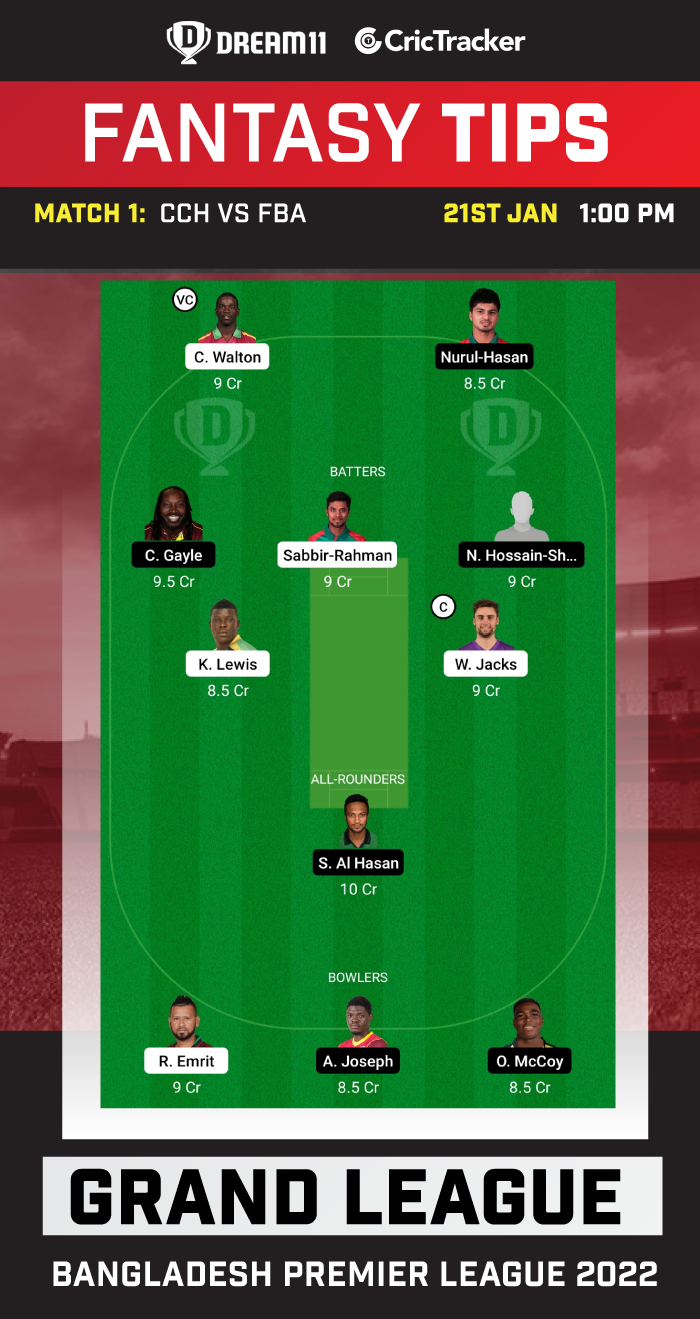 Chattogram Challengers are expected to win this match.