Bangladesh vs Pakistan 3rd T20I Match Prediction – Who will win today’s match between BAN vs PAK?

Bangladesh vs Pakistan 3rd T20I Match Prediction – Who will win today’s match between BAN vs PAK?

Nothing barring pride will be at stake for Mahmudullah and Co. on November 22, as they attempt to avoid a 3-0 clean sweep at the hands of Pakistan in their backyard. Despite Pakistan not winning most convincingly in either of the two games thus far, the gulf between both teams has been still been visible.

Bangladesh are yet to chase, but that’s been down to their own choice, given Mahmudullah has called correctly twice. However, on both occasions, the hosts ended up setting a target that nearly no Pakistan unit would feel challenged by.

If anything, Bangladesh have only extended their rut from the T20 World Cup, where a victory in the Super12s eluded them as long as their campaign lasted, in stark contrast to Pakistan, who did no wrong until they ran into eventual champions Australia.

In this series, keeping aside the opening T20I, when the visitors were teetering at 24/4 in a 128-chase, Pakistan have hardly been challenged, even as the strike rates of their batters have been rather uncharacteristic for the most part, including Mohammad Rizwan and Fakhar Zaman’s sedate knock in the previous game.

While the Dhaka tracks have not been the friendliest for batting – as evidenced by Pakistan taking 18.1 overs to chase a sub-par 109-run target in the second T20I – Bangladesh batters have never been able to unshackle themselves against the skilful bowling attack they are stacked against. Expect another low-scoring encounter on a spin-friendly track.

The Pakistan skipper was frank in admitting “things don’t go as per plans” at times in cricket. His mode of dismissals have been same, having chopped on Taskin Ahmed and Mustafizur Rahman in the first and second T20I, respectively, but he is too prized a player to fail thrice.

After an underwhelming run at the T20 World Cup, Hasan Ali proved his mettle in the series opener, bagging a Player of the Match for a three-wicket haul. He was rested in the second game, and is expected to be back as Pakistan eye a clean sweep. 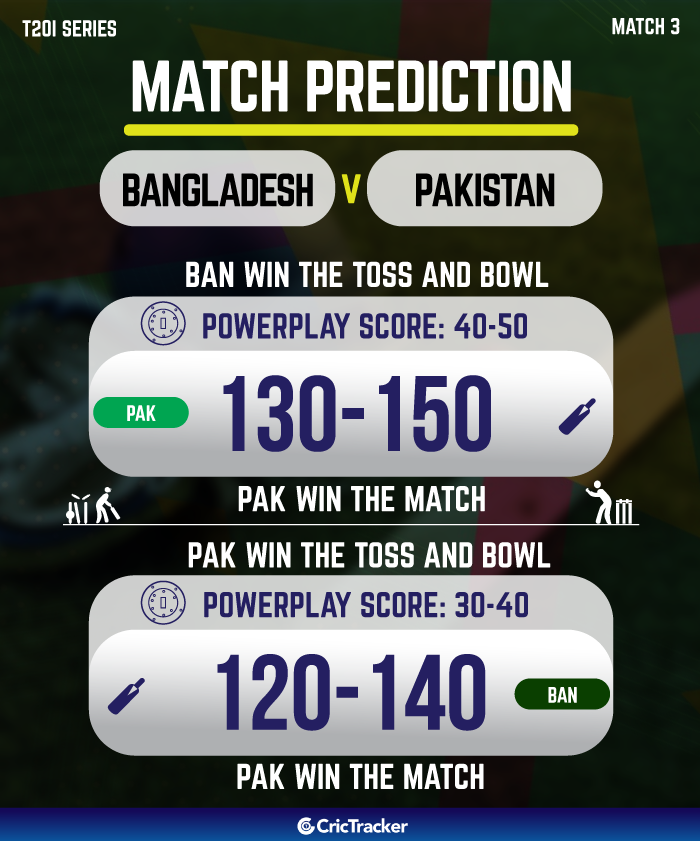