Bangladesh vs Windies, 1st ODI, Match Prediction: Who will win the Match?

Bangladesh vs Windies, 1st ODI, Match Prediction: Who will win the Match?

Windies would be looking to make a comeback after the shambolic Test series.

Bangladesh were the dominant side in the Test series as Windies kept searching for breathing space. However, ODI cricket is a different ballgame altogether and the visiting team would be looking to make amends. Nevertheless, their form in the 50-overs format has been contrasting as well. The Tigers recently thumped Zimbabwe in the three-match series after an impressive Asia Cup campaign.

The Caribbean team lost 3-1 against India and to add to their agony, they also lost the practice match against BCB XI. The first ODI is scheduled to be played tomorrow at the iconic Shere Bangla National Stadium in Mirpur. Both teams have limited cricket ahead of next year’s World Cup and they would be keen to get their combination in place ahead of the mega tournament in England and Wales.

The track is expected to be a decent one for batting, but the spinners may come into play bearing in mind the nature of a general sub-continent wicket. The deck may also get slow and low as the encounter progresses. Hence it won’t spring a surprise if the sides opt to bat first after winning the toss, put runs on the board and then exert pressure on the opposition.

Bangladesh would have the privilege of having both Shakib Al Hasan and Tamim Iqbal in the eleven after almost three months. The onus would also be on the experienced campaigners in Imrul Kayes, Mushfiqur Rahim, Mahmudullah to score runs. Mustafizur Rahman and skipper Mashrafe Mortaza are the fast bowlers with the spin-trio of Nazmul, Shakib and Mehidy Hasan Miraz.

Kieran Powell and Shai Hope were impressive in the warm-up match and they would want to carry on with their good form. The Windies would definitely look up to Shimron Hetmyer to deliver the goods. The batting has depth with all-rounder Fabian Allen to bat in the lower middle-order. Allen will also partner Bishoo and Chase in the spin department with Thomas and Roach being the seamers. 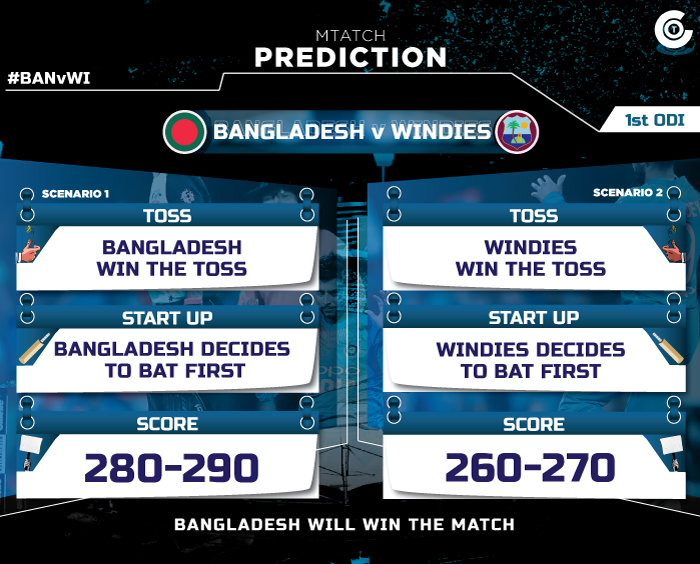