Mushfiqur Rahim becomes a must whenever Bangladesh plays a Test match. Though there is a better captaincy option than him for this Test match.

The only Test match between Bangladesh and Zimbabwe will be played at the Shere Bangla National Stadium in Dhaka.

Zimbabwe’s tour of Bangladesh gets underway with the one-off Test match starting on Saturday. The visitors are missing their regular skipper Sean Williams as Craig Ervine has been named the captain for this game. Kevin Kasuza continued impressive start to his career and scored 70 runs in the two-day practice game while the rest of the batsmen failed to convert their starts.

They are also coming off a 1-0 defeat to Sri Lanka at home last month. But Zimbabwe impressed many with their performance and rather they went on to dictate terms in the second Test of the series only for the rain to play spoilsport. Bangladesh, on the other hand, are not having a great time in the longest form of the game. Pakistan thumped them easily earlier this month and the skipper Mominul Haque will hope that his troops step up finally against Zimbabwe.

The forecast for the first couple of days is absolutely for the Test match to take place in Dhaka. However, there are little chances of rain on the third day while fourth and fifth day is expected to witness a lot of rain. The temperature will hover around 30 Degrees Celsius according to AccuWeather over the course of the game.

The surfaces in Bangladesh for the Test matches are generally known to turn from Day 1. The home team prefers square turners to dominate the proceedings and the trend is expected to continue. Even if the curator keeps a little bit of a grass, the surface will break down soon and it will start turning from the second itself. It would be wise to bat first after winning the toss.

Mushfiqur Rahim becomes a must whenever Bangladesh plays a Test match. He is the best batsman they have and can be made captain of the team as well. Apart from Tamim and Mominul will also be great options. Najmula Hossain also showed decent composure in the Pakistan Test. With the ball, the likes of Taijul Islam and Nayeem Hasan can make an impact.

For Zimbabwe, Taylor, Ervine and Raza, the dynamic trio, has to be picked at any cost. While Taylor and Ervine look after the middle-order, Sikandar Raza’s all-round abilities make him an ideal captain option. Kevin Kasuza and Masvaure batted well too against Sri Lanka. 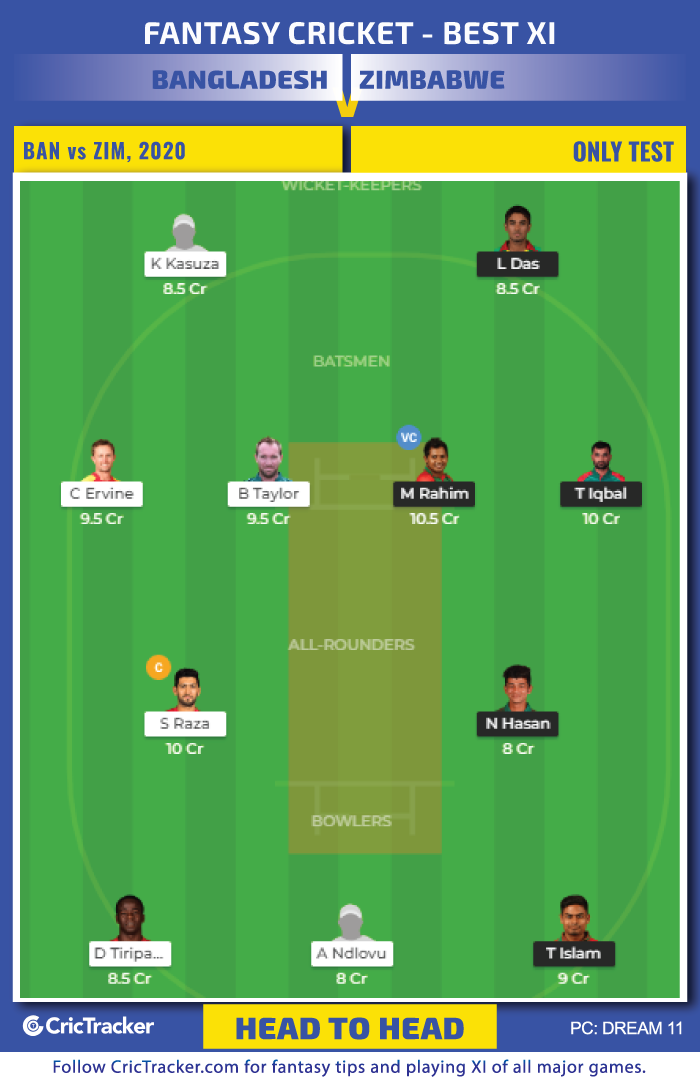 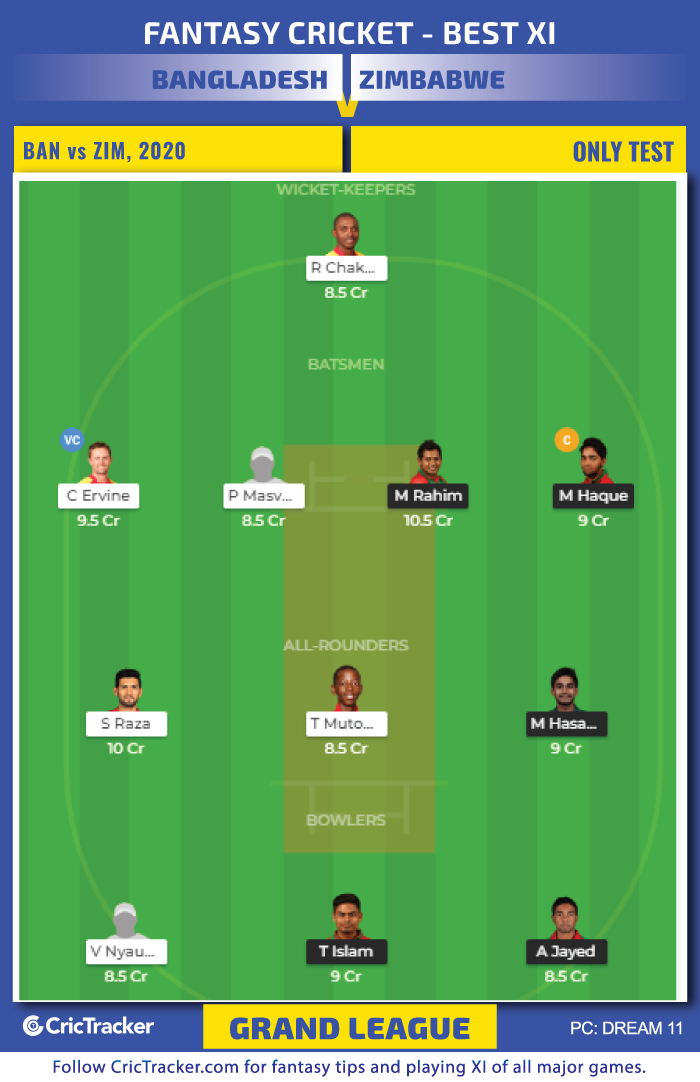 In an attempt to have Taylor, Ervine, Tamim, Rahim and Raza in your team, you might struggle with credits while picking the bowlers. In that case, leaving out Taylor can be a good option as he isn’t in good form. He is coming off a lean run in the Pro50 Championship and didn’t have a great Sri Lanka series.

Taijul Islam should be picked for this Test as it is expected to be a square turner. He will definitely make an impact. So far, only 27% users have picked him in Dream11 Fantasy.

This match is expected to go down the wire . Though Bangladesh are the favourites expect Zimbabwe to put up a brilliant show like they did against Sri Lanka.