Perth Scorchers can make it two wins in two games at home if they can restrict Chris Lynn.

Brisbane Heat who have lost all the three matches they played so far will face Perth Scorchers who have gone down in four of the five matches. Scorchers have a big boost ahead of the second home game as Mitch Marsh returns to the side after being released from the Australian Test squad. He and fast bowler Matt Kelly comes in for his first game of the season replacing the spinner Usman Qadir and Sam Whiteman in the squad. Their only win this season came at home against the Adelaide Strikers thanks to their bowling.

For Brisbane, Matt Renshaw replaces Sam Heazlett in the squad but Alex Ross has more chances of featuring in the playing XI. Chris Lynn, who is awaiting his first win as captain, will take on his favourite opposition, the Perth Scorchers. The Heat skipper has an impressive record against them and could send the terrifying Perth’s pace-attack over the fence. Lynn has good experience of dealing with them that too at the WACA which wasn’t any different.

The 21st match of the Big Bash League (BBL) will be played between Perth Scorchers and Brisbane Heat at the Perth Stadium.

The game will be live on Sony SIX and Sony SIX HD in India. Live streaming is available on Sony LIV.

The new Perth Stadium has not been any different in its nature from that of the WACA. The pace and bounce have been kept alive at this venue like it used to be at the previous Stadium. In the first BBL game played this season the Scorchers’ bowlers ran riot over the Adelaide Strikers’ batsmen.

In the eight matches against the Perth Scorchers, Chris Lynn has amassed 367 runs with four fifties out of which three were 75+ scores. No other player has even 300 runs against them in the BBL. His average of 61.16 and S/R of 152.91 are easily the best for any player with 100 runs in the BBL against Scorchers. Lynn has hit 26 sixes against them 16 more than any other player at an average of 9.2 balls per six. Once again Lynn holds the key against his favourite opposition.

Chris Lynn should start as the captain or at least vice-captain in this game. Any of the Perth Scorchers’ bowlers can be considered for the other multiplier role. Ashton Turner and Max Bryant can be alternatives for multipliers but it could come down to how the young Bryant tackles the pacers. 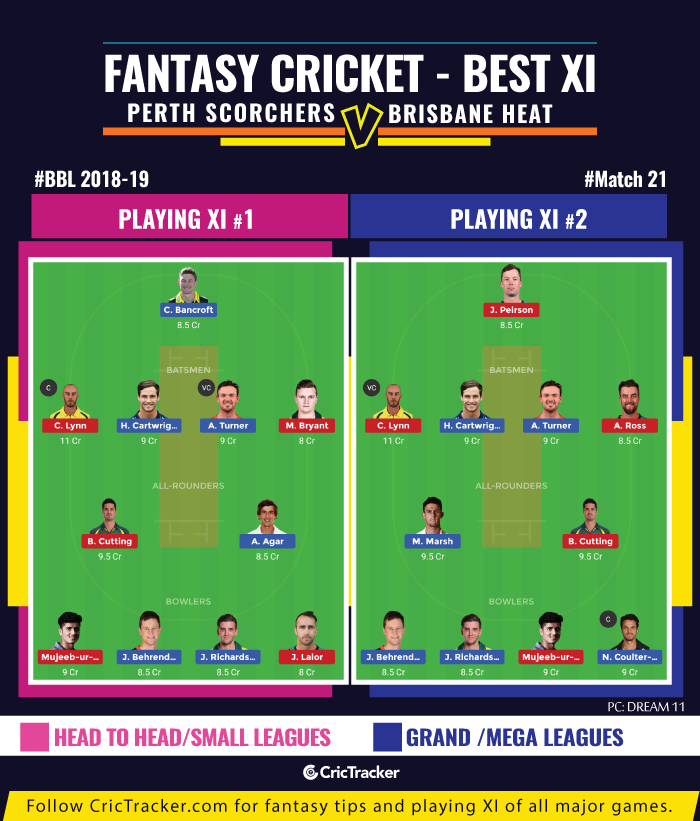 This Big Bash League has come with a surprise of producing slow wickets and to an even bigger surprise, Andrew Tye turned inconsistent. On the pitches where slower balls and slogging death overs have produced wickets, Tye has failed to come up with his best. He can be excluded based on the team combination being considered.

Perth Scorchers can make it two wins in two games at home if they can restrict Chris Lynn.