The Scorchers are languishing at the bottom of the points table.

The Perth Scorchers have had a struggling campaign thus far in this edition’s Big Bash League (BBL) as they only have won one out of their six matches. They are languishing at the bottom of the points table and need to churn out something herculean to make a comeback into the series. Being the most successful team in the tournament’s history, the Scorchers can’t be completely ruled out.

Their next encounter is scheduled tomorrow against Melbourne Stars at the renowned Melbourne Cricket Ground (MCG). The Stars, led by Glenn Maxwell, have played the least number of matches (5) this season along with Brisbane Heat. Yet, they are handsomely placed in the third position of the points table. With five matches left, the Stars are one of the favourities to end atop the points table.

The pitch at the iconic stadium has traditionally been good for batting, but it has also helped the bowlers to a significant extent. Only one encounter has been played thus far at the venue and the team batting second, the Stars itself, emerged triumphant. Therefore, it won’t be much of a surprise if the teams opt to field first after winning the toss as the pitch is expected to get better for batting.

The left-handed Ben Dunk and Nick Narkin maybe the opening batsmen with Nic Maddinson at number three. A lot would depend on Dwayne Bravo, who would bat at number five. Seb Gotch is the designated wicketkeeper. The onus will also be on the likes of Liam Plunkett, the Englishman. Mitchell Beer and Tom O’Connell form the spin-bowling department with Boland and Bird being the pacers.

Michael Klinger and Sam Whiteman are most likely to open the batting. The all-rounder and captain Ashton Turner needs to step up and deliver as well. The batting has depth with William Bosisto coming as low as number eight. The pace bowling department has Jason Behrendroff and Andrew Tye in the ranks. Usman Qadir is the spin bowling option in the lineup. 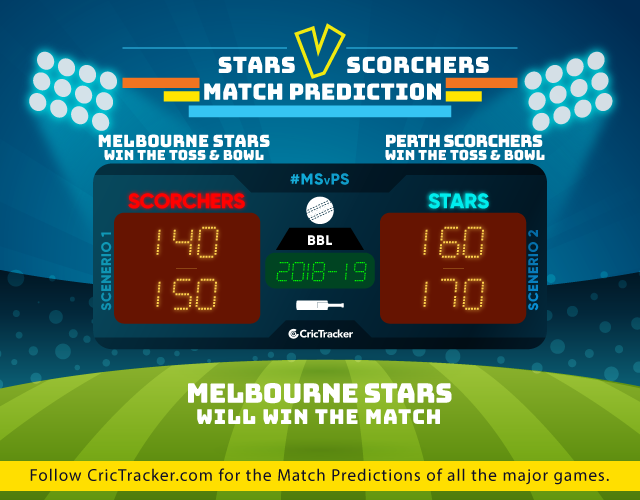