The Perth Scorchers will start as favourites in a game where both the squads look equal on paper.

Perth Scorchers are one of the most consistent teams in the history of the Big Bash League (BBL) but have been far from that image in this season. The 3-time champions have won only two games this season from the seven they played thus far. Their batting has found some momentum lately with the inclusion of Cameron Bancroft. They will be up against the Sydney Sixers at the Perth Stadium on Sunday. The Sixers currently stand at No.4 with four wins from seven matches.

Ashton Turner has been released from the Australian ODI squad and will be leading the Scorchers. The Sixers have included their new signing James Vince in the 13-man squad. Vince will replace his countryman Joe Denly who has been called up to represent the England team in the Test series against the Windies. Mickey Edwards has also been added to the squad in place of Lloyd Pope. The Sixers’ squad now consists of the Edwards brothers, Jack and Mickey for the first time.

The 30th match of the Big Bash League (BBL) 2018-19 will be played between Perth Scorchers and Sydney Sixers at the Perth Stadium in Perth.

The Perth Stadium has continued the tradition of being a pacey and bouncy track like the W.A.C.A. The track Perth Scorchers get at their home ground is one of the reasons why they fill their squad with a variety of pacers who can delivery at express pace.

Last minute update: Ashton Agar is ruled out of this fixture due to an ankle injury. Cameron Green has replaced him in the squad.

Cameron Bancroft added depth to the Scorchers’ batting returning after his ban. His scores have gradually increased as he made 2, 19, 24 and 59 in the four matches he has played thus far. Bancroft scored a quick-fire fifty against Melbourne Stars in the last game to hand Perth their first away win of the season.

Ashton Turner and Cameron Bancroft were impressive with the bat in the previous game. They will be crucial for the Scorchers yet again. James Vince will be hoping to make his first appearance of this season count. The likes of Tom Curran and Sean Abbott are perfect alternatives for multipliers. 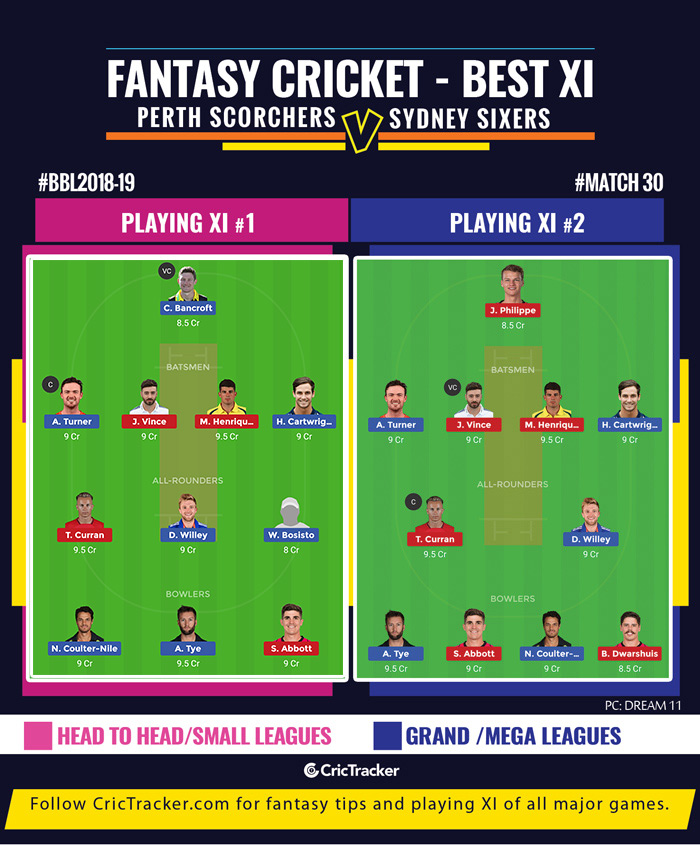 It will be ideal to pick as many pacers as possible from both sides for this game. The pitch is expected to stand by its true nature – assist pace and bounce.

The Perth Scorchers will start as favourites in a game where both the squads look equal on paper.