Expect the Hobart Hurricanes to carry on their rich form and register the 6th win of the season.

The Melbourne Renegades halted Hobart Hurricanes’ winning spree by clinching a thrilling victory at the Docklands last week. With that, the Hurricanes’ hopes of recording their longest winning streak in the BBL came to an end. However, with five wins from six matches, they still stand at the top of the points table. The George Bailey-led team will be back on the field against the Melbourne Stars after a one-week break.

The Melbourne team suffered back to back defeats after some big names left them to join the national side the ODI series against India. After three consecutive wins, the Stars missed the services of Glenn Maxwell, Adam Zampa, Peter Handscomb and Marcus Stoinis. They will have a tough task against the in-form Hurricanes who have named an unchanged once again. The Stars left out Michael Beer and Tom O’Connell will be in line to replace him in the XI.

The 31st match of the Big Bash League (BBL) 2018-19 will be played between Melbourne Stars and Hobart Hurricanes at the Melbourne Cricket Ground.

The track at the MCG isn’t a high-scoring one but gives an advantage to the chasing side. The teams batting first aim for big totals and end up with below par scores given the big boundaries at the venue. Each of the previous 12 completed Twenty20 games were won by the chasing unit. This game will be played after the WBBL game between Melbourne Stars and Sydney Sixers.

On his return, Nic Maddinson has failed to impress with scores of 2 and 5. The Melbourne Stars will need far more than this from their skipper who was in good form before an injury. Maddinson scored 162 during the Sheffield Shield game in which he suffered an injury.

D’Arcy Short has been the most valuable player for the Hurricanes this season and has to be picked up as at least vice-captain. In the last two matches, Dwayne Bravo either performed with the bat or ball. The Stars will, in fact, need Bravo to perform in both the departments. The likes of Matthew Wade and James Faulker can be considered as vice-captain given their recent success in the tournament. 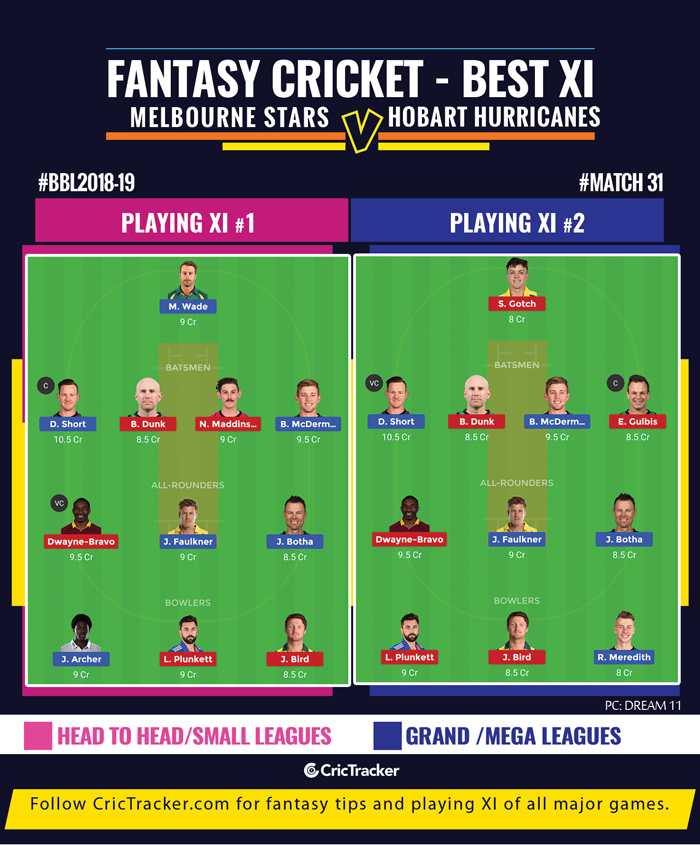 Going by the recent form, Jofra Archer shouldn’t be picked. The pacer who was sensational last season hasn’t caused any damage after a couple of good performances at the start of the tournament. Evan Gulbis opening the innings will help improve his prospect of creating an impact in the game and also power the Stars to a quick start.

Expect the Hobart Hurricanes to carry on their rich form and register the 6th win of the season.