Johan Botha has announced his retirement and won't be available now for the Hurricanes.

The 44th match of the ongoing Big Bash League (BBL) will see two teams with contrasting form lock horns. Hobart Hurricanes who are a team to beat this season will host the struggling and the seventh-placed team Brisbane Heat in the first match of the doubleheader day. The Heat botched up a 135-run chase against the Stars in the previous game and are in a situation to win every game now to qualify for the knockouts.

The Hurricanes, on the other hand, were dealt with a blow as Johan Botha announced a sudden retirement from all forms of the game. Jarrod Freeman has replaced him in the squad but he is unlikely to get a game. The team is in great form is expected to brush aside the Heat easily. Having said that, the likes of Chris Lynn and Brendon McCullum can thump any bowling attack and if they find their groove in this game, it is very much possible that the Heat can cause an upset.

The 44th match of the Big Bash League (BBL) 2018-19 will be played between Hobart Hurricanes and Brisbane Heat at the Bellerive Oval in Hobart.

The game will be live on Sony ESPN and Sony ESPN HD in India. Live streaming is available on Sony LIV.

The Bellerive Oval is a small ground with short square boundaries which will help a batsman like Lynn. Defending the total is tough at the venue and chasing should be the best option.

Jarrod Freeman comes into the squad for retired Johan Botha.

Mujeeb Ur Rahman has picked a wicket in each of his last five matches and has been economical as well. He could turn out to be a smart pick in the fantasy team.

D’Arcy Short is a must as captain or vice-captain looking at his performances in the tournament so far. Matthew Wade and Ben Cutting are also in great touch and will be handy as multipliers. One can never count out Lynn and a must-win match for his team might bring out the best in him. The other alternatives are Max Bryant, McCullum and George Bailey. 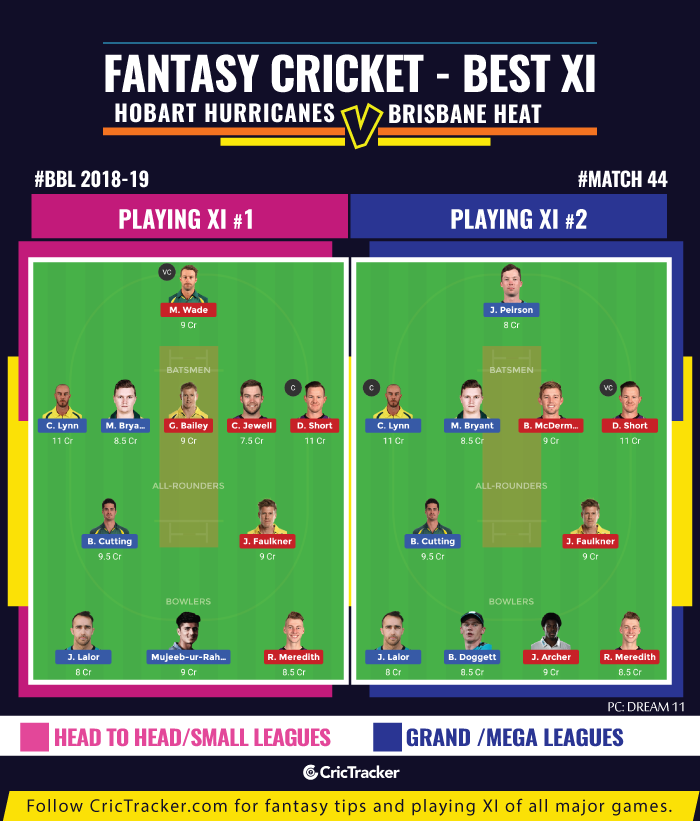 Caleb Jewell with 7.5 credits to compensate for picking the likes of D’Arcy Short and Chris Lynn who collectively cost 22 credits.

Going by current form, the Hurricanes are the clear favourites to win this game.