There's injury news, one of the players also returned to the Australia squad for the Test.

After the huge loss against the Sydney Sixers in their last game, the Adelaide Strikers have more or less shelved their hopes of making it to the semifinals. The team has got three more games left in the league stages of the tournament. In the first of those matches, they’ll meet the Hobart Hurricanes whom they’ve defeated in the final last year to lift the trophy.

The Hurricanes have been quite a force to deal with this season. With momentum not on their side, it won’t be an easy task for the Adelaide Strikers to get the better of them. Hobart registered wins in four out their last five games and sealed a spot in the semi-final. Even though the chances are still there for the Strikers to get into the knockouts, a lot will depend on the external factors. Therefore, this match is nearly a dead rubber.

The 47th match of the Big Bash League (BBL) 2018-19 will be played between Hobart Hurricanes and Adelaide Strikers at the Aurora Stadium in Launceston.

The Launceston pitch is one of the slower tracks in the tournament. The Perth Scorchers were bowled out for 107 in the only game that was played at this venue in this season. Even a player like D’Arcy Short, who is in great form, found it tough to get the big shots while playing here.

Riley Meredith misses out from this game due to illness and will be replaced by Tom Rogers.

Caleb Jewell’s scores in this BBL are 61*, 1 and 32. His 7.5 credits will help compensate for picking players with higher credits.

D’Arcy Short is a must as captain or vice-captain. One of Colin Ingram, James Faulkner, Matthew Wade and Alex Carey can be picked as another multiplier. Rashid Khan, Jofra Archer and George Bailey are the other alternatives that you can pick. 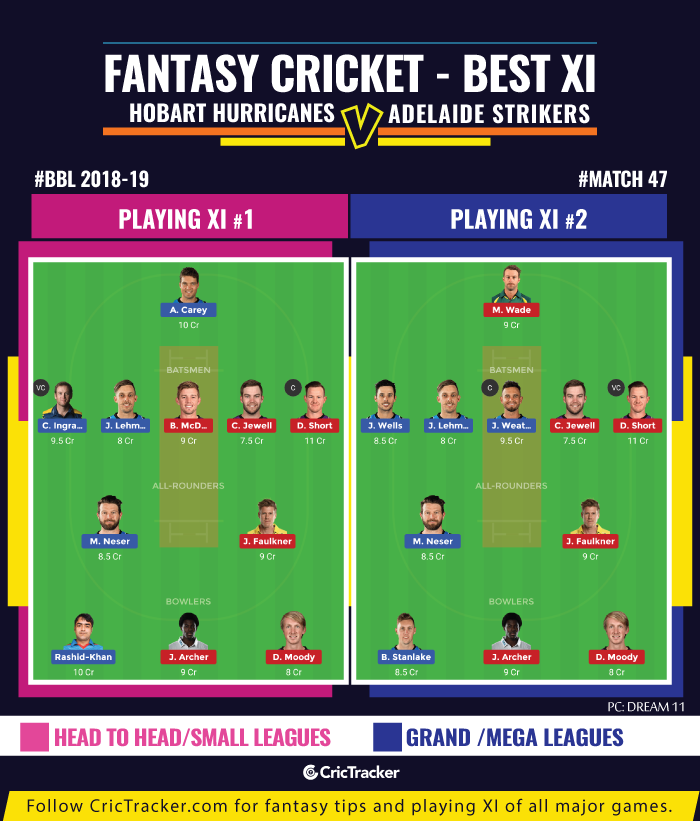 Matthew Wade and Alex Carey are the two available options as the wicketkeeper for the upcoming game. Alex Carey was run out in most of the games that he played. On the other hand, Wade has produced a big inning every second game. Picking anyone between these two should be a good option.

The Hobart Hurricanes are predicted to win the match.