The Gabba track has got enough on offer for both the batsmen as well as the bowlers thus picking a balanced side becomes really crucial.

Brisbane Heat will host the Perth Scorchers at the Gabba for the 48th match of BBL 2018-19. With both these teams already out of the tournament, this match doesn’t hold much significance when the whole dynamics of the points table are considered. But, it is an opportunity for one of the sides to salvage the lost pride.

Both the Heat and the Scorchers only registered three wins each in eleven games. However, Brisbane sits one point ahead of Perth as their game against Sydney Thunder yielded no result due to the failure of floodlights. When these sides met each other earlier in the season, the Heat defeated the Scorchers at the Optus Stadium.

The 48th match of the Big Bash League (BBL) 2018-19 will be played between Brisbane Heat and Perth Scorchers at the Gabba in Brisbane.

The Gabba track has got enough on offer for both the batsmen as well as the bowlers. There will be good bounce and carry on this pitch. The chasing teams have found slightly more success while playing here.

Nathan Coulter-Nile has soreness in his hamstring.

Chris Lynn has failed terribly in the last four matches. His scores read 4, 2, 0, 10 in the last four innings which aggregates only to 16 runs at an average of 4. He never scored less than 30 in four consecutive innings in the BBL. The hard-hitting batsman could come back strong in the upcoming match.

The first preferences that you should have a look at as your captain and vice-captain are Shaun Marsh, Ben Cutting and Ashton Turner. Andrew Tye, Cameron Bancroft and Chris Lynn are the other options as multipliers. 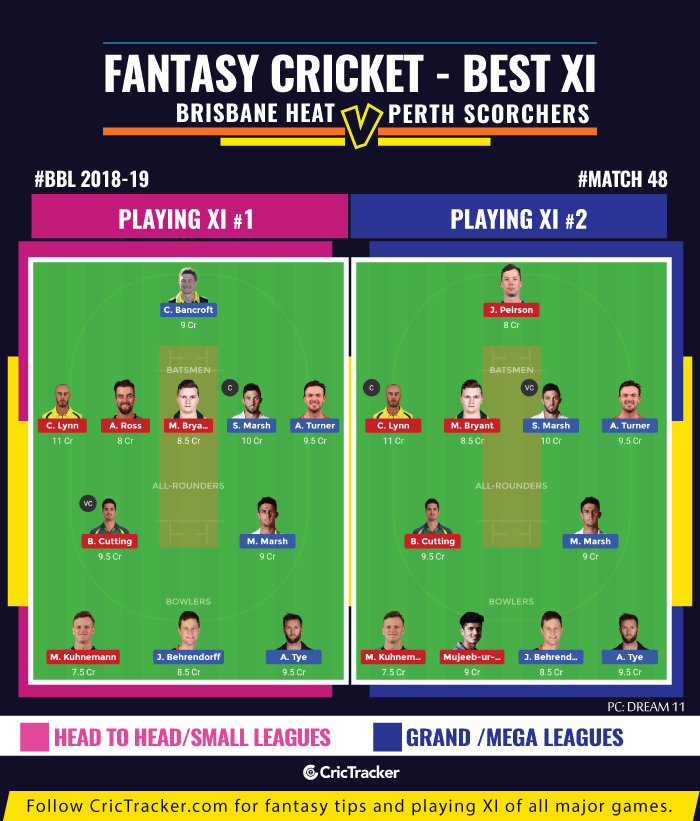 Picking Chris Lynn and Mujeeb Ur Rahman is subjected to risk given their recent performances and their price-tags.

Brisbane Heat are the predicted winners for the upcoming game.