It will be a dead rubber in the BBL 2018-19 to kick off the weekend. The Adelaide Strikers will take the Perth Scorchers on in their last game of the tournament in this season. It has been a sorry story for the Strikers in this BBL. The defending champions lived nowhere up to the expectations and were extremely disappointing. They lost eight games out of thirteen and are second last on the points table.

The story of the Perth Scorchers is also pretty much similar. The side won one game lesser than the Strikers and are placed at the bottom of the table. This match will be the last BBL game for one of their veteran players, Michael Klinger. Both these teams will look forward to winning this last game to end the tournament on a high.

The 54th match of the Big Bash League (BBL) 2018-19 will be played between Adelaide Strikers and Perth Scorchers at the Adelaide Oval.

All the six games that were played at the Adelaide Oval witnessed scores over 150. It should be pretty much the same in the upcoming game as well. Teams chasing have found comparatively more success.

Ashton Turner scored a 42-ball 69 in the last match. He had a tough time in the four games before this one where he registered scores of 2, 1, 4 and 2. However, he looked to be in great touch before this string of single-digit scores with scores of 60, 43*, 47 and 60 in four innings. Turner is expected to carry on with the momentum that he found in the last game. 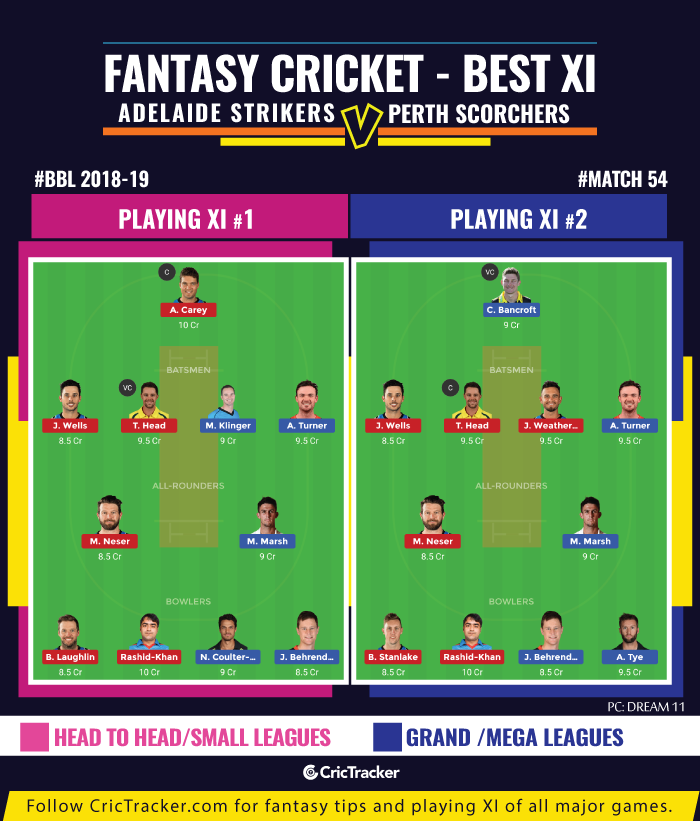 Choosing among Carey, Bancroft and Inglis in the wicketkeeper’s category. Carey hardly fails and has to ensure that he doesn’t get run out. Inglis will open for the Scorchers which pushes Bancroft down to No.3/No.4.

The Adelaide Strikers are predicted to win this match.