Both teams have named unchanged squads for the knockout at the Adelaide Oval.

The Adelaide Strikers had won four games on the trot in the second-half of the round robin stage in the 2019-20 BBL. But the Hobart Hurricanes’ halted their surge in the previous game at the Adelaide Oval itself. It means that the Strikers will now have to win three matches in a row to get their hands on the trophy. Travis Head and Co will next face the Sydney Thunder in the Knockout on Saturday.

In the first round, the Thunder beat the Strikers by three runs at the very venue. The Thunder, led by Callum Ferguson, are pretty high on confidence. They rolled over the Hurricanes in the Eliminator by 57 runs in the latter’s backyard. The winner of the knockout will progress to the Challenger on Thursday, February 6. On head-to-head, the Strikers and Thunder are locked at 2-2 in Adelaide.

Five out of the seven matches have been won by the team, batting first. Hence, teams can avoid chasing on a surface that’s pretty good for batting. In a crunch-game, batting second can get the better of a batting unit. There are no chances of a downpour, though the clouds will be there throughout. The temperature will be around 18 degrees Celsius with the humidity in the 60s.

The Strikers have persisted with their previous 13-man squad. Their batting has a fair amount of depth. Though, Jonathan Wells is their top run-scorer with 444 runs, the rest have lent him the apt support. Salt, Carey and Weatherald have in excess of 300 runs. In bowling, Rashid Khan and Peter Siddle will hold the key without a doubt. Agar has also been amongst the wickets with 16 scalps.

The Thunder haven’t changed their winning combination either. Alex Hales has been in jaw-dropping form, scoring 509 runs at 39.15. Alex Ross, Callum Ferguson and Usman Khawaja have in excess off 300 runs and a lot will depend on them. Sams has done a chunk of the work in bowling, picking 27 wickets at an economy of 7.75. Chris Morris and spinner Jonathan Cook’s role will be crucial as well. 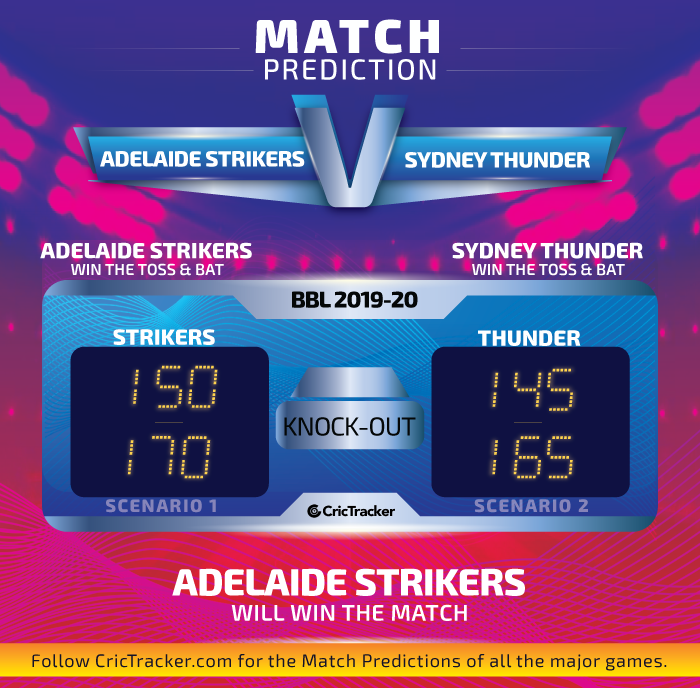