Chris Lynn is a T20 specialist batsman, who is known for his bashing hitting. In the previous season of BBL, he mustered 385 runs in 14 games with four centuries.

Sydney Thunder won the toss and elected to bat first

The 1st match of the Big Bash League (BBL) 2019-20 will be played between Brisbane Heat and Sydney Thunder at  The Gabba in Brisbane.

Brisbane Heat will lock horns with Sydney Thunder in the season opener of BBL 2019-20. The Heat have announced a star-studded squad that comprises of Chris Lynn, Tom Banton, Max Bryant and Matt Renshaw, who will have a responsibility on their shoulders to score runs for their side. However, they will be short of their new signing AB de Villiers who will join the team in the second half of the season.

But, still, Heat has enough firepower present in their batting that can outclass Thunder in the season opener. In bowling, they have Josh Lalor, Ben Cutting and Mitch Swepson, who did convincingly well in the previous season of the league and the same will be expected from them again.

Sydney Thunder has Callum Ferguson, Alex Hales and Usman Khawaja with the bat whereas in bowling they have Chris Green, who is an exciting bowler. They also have a formidable fast bowling duo of  Chris Tremain and Daniel Sams as they will play an important role for their side in taking early wickets in the match.

The weather for the BBL 2019-20 season opener is expected to be perfect with no chances of rain. However, the temperature is expected to deviate between 29 and 31 Degree Celsius according to Accuweather.

The track at Gabba is expected to go in favour of the fast bowlers as far as trends are concerned. The pacemen will get a lot of bounce from the wicket because of which the batsmen will thrive for playing strokes against them. However, the team batting first will have to post some big score otherwise they will have to end up on the losing side. The chasing teams have found it relatively easy at this venue.

AB de Villiers will join the Brisbane Heat in the second half of the season.

Chris Lynn is a T20 specialist batsman, who is known for his hitting. In the previous BBL season, he mustered 385 runs in 14 games with four half-centuries. He will be a hot favourite pick for any Dream11 Fantasy Side. Callum Ferguson had a great stint in BBL 2018-19 as he scored 442 runs in his 14 outings and will look to do the same in the season opener. Josh Lalor will be another important player to watch out, who was the leading wicket-taker for his side Sydney Thunder in last season. 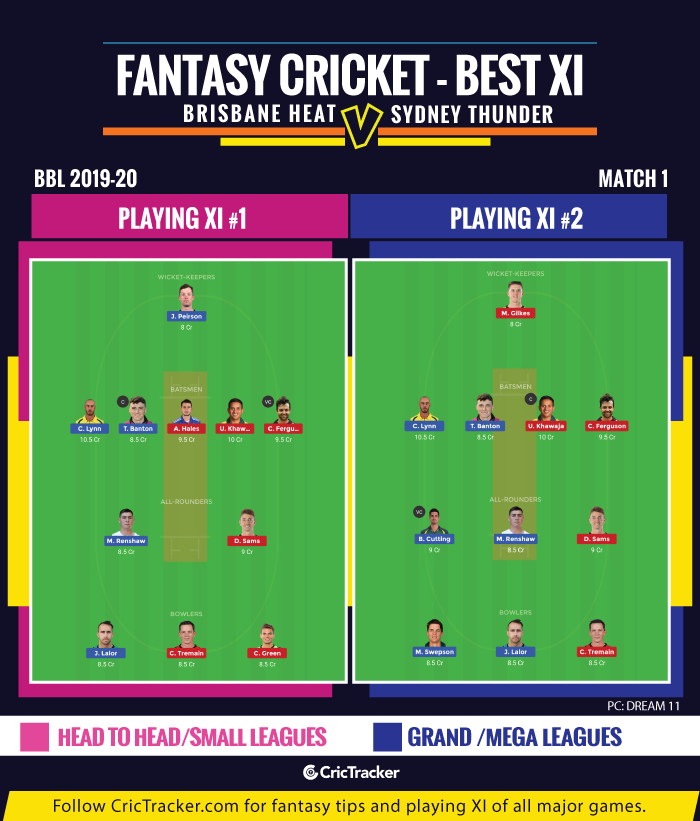 Brisbane Heat is the favourites to win the season opener against Sydney Thunder.