Sydney Thunder have got off to a great start in 2019-20 edition of the Big Bash League. They have won back to back two games with one game got abandoned.

Sydney Thunder have got off to a great start in 2019-20 edition of the Big Bash League (BBL). They have won back to back two games with one game got abandoned. They were in a good position to win their previous game against Adelaide Strikers before the match was called off due to poor air quality in Canberra. So, they got only one pint in that match.

They are currently leading the points table with five points and will look to consolidate their position when they will lock horns with Sydney Sixers on Saturday. Their team has performed convincing well so far in the ongoing tournament and would be looking to continue with the same form in the upcoming match.

The track at Sydney Cricket ground is quite hard and is expected to go in favour of the batsmen. So far the fast bowlers have not got any extra bounce from the wicket and that is making it quite easy for the batsmen to smash the pacers all across the park.

Thunders and Sixers have won the match batting as well as fielding first in Big Bash League 2019-20. However, the side winning the toss will look to bat first because the teams have found it easy to chase on this ground. The weather is expected to be clear and perfect for the T20 match. Moreover, the temperature is expected to deviate between 20 and 29 Degree Celsius according to Accuweather.

Sixers have opted for two changes in their side from the 13-men squad that defeated Perth Scorchers in the previous match. They have picked veteran spinner Steve O’Keefe and pace bowler Henry Thornton replacing Hayden Kerr and Mickey Edwards. Their bowling has done a convincing job so far in the tournament and the same is expected when they will lock horns with Sydney Thunders.

Sydney Thunder has made only one change from the squad that locked horns with Adelaide Strikers as they have picked Brendon Doggett, the right-arm fast bowler as a replacement for  Nathan McAndrew. However, all the eyes will be on Chris Morris, who was recently bought by RCB in IPL 2020 auction at a whopping fee of 10 Cr. He would be eager to show his calibre in the upcoming game with a brilliant display of his all-round performances. 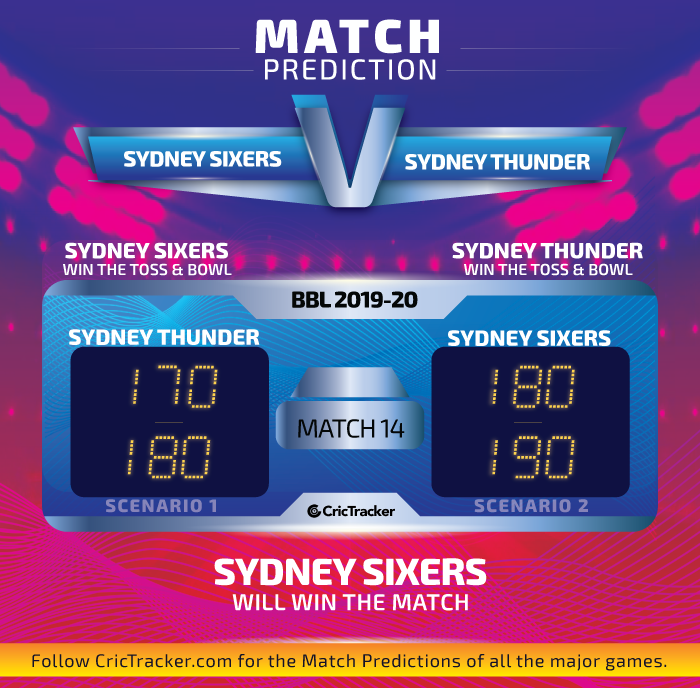