The Strikers have won all their four matches while batting first.

Adelaide Strikers have turned out to be the team to beat in the 2019-20 edition of the Big Bash League (BBL). Alex Carey and Co are unbeaten, having won three out of four matches, the other game producing no result. In their previous game, the Strikers beat the Melbourne Renegades by 18 runs. They will now return to the Adelaide for their upcoming game against the Sydney Thunder.

The Thunder, on the other hand, started with win over the Renegades and Brisbane Heat. But lost to the Sydney Sixers in the Super Over. Placed third in the points table, Callum Ferguson’s men would wish to make New Year’s Eve a special one for themselves with their third win. The Strikers and the Thunder earlier met at the Manuka Oval in Canberra. However, rain came and played spoilsport.

Last in the last BBL, five of the seven games at the Adelaide Oval were won by the team, batting second. But the Strikers may want otherwise as their wins this season have come while batting first. Only one game has been played in Adelaide this season and 381 runs were scored in 36 overs. The playing conditions will be sunny with the temperature around the 23 degrees Celsius mark.

Fast bowler Harry Conway has returned to the 13-player squad replacing leg-spinner Liam O’Connor. The Strikers have mostly depended on Jonathan Wells, Alex Carey and Jake Weather, who have 161, 186 and 152 runs respectively. In bowling, Rashid Khan and Peter Siddle have been tough to pounce on. The duo has nine wickets with an economy of 6.80. Pacer Wes Agar has five wickets as well.

Callum Ferguson has 156 runs and the Thunder have tended to depend heavily on their skipper. Alex Hales and Usman Khawaja, the openers, have 118 and 104 runs respectively. It’s now time for the middle-order to find some rhythm. Daniel Sams is their leading wicket-taker with seven scalps. He has gotten decent support from Nair, Cook and Morris, all of whom have four wickets each. 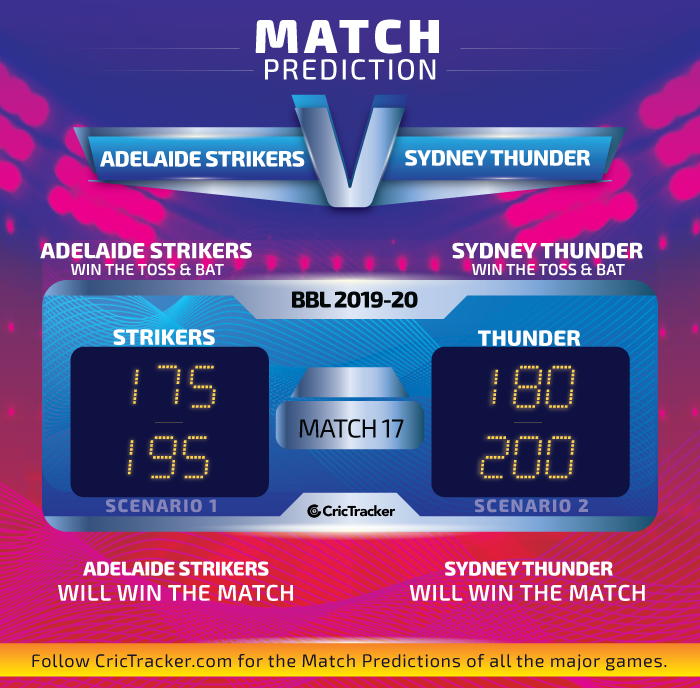