At the MCG, the Stars have a 5-3 lead over the Renegades on head-to-head count.

The Melbourne Renegades have gone nowhere in the 2019-20 edition of the Big Bash League. Having lost five matches on the trot, they are languishing at the bottom of the points table. In their last encounter, Aaron Finch and Co gave Sydney Sixers a run for their money, but in the end, lost by six wickets. Their next match is against the Melbourne Stars at the iconic Melbourne Cricket Ground.

The Stars are sitting pretty on top of the table with eight points from five matches. The Stars, led by Glenn Maxwell, were put under the pump in their last two matches. But they held their nerve to find themselves in a comfortable position. On head to head, the Stars have a 11-5 lead over the Renegades. Even at the iconic venue in Melbourne, the Stars have won five out of eight matches.

Last season, the MCG didn’t produce batting paradises and run-making was a fairly difficult task. The bowlers did have their say, keeping a check on the runs. Scores in excess of 150 wasn’t regular on the deck. Out of the five games, three were won by the team, batting first. The conditions will be hot with the temperature around the 18 degrees Celsius. The humidity will mostly be in the high 70s.

Hilton Cartwright and Sandeep Lamichhane return to Melbourne Stars squad replacing Jono Merlo and Haris Rauf. Marcus Stoinis is their leading run-scorer with 213 runs at 53.25. But the rest of the batting hasn’t quite stepped up. The Stars’ bowling has been exceptional. None of their regular bowlers have economy above eight. Among the ones in the squad, Zampa has the most wickets.

Harry Gurney and all-rounder Jack Wildermuth mark their return to the squad. The duo has replaced Marcus Harris and fast bowler Joe Mennie. Shaun Marsh, Aaron Finch and Beau Webster have put up collective efforts thus far. Sam Harper has threatened, but needs to do better. Kane Richardson and Harry Gurney will hold the key with the ball. Cameron Boyce has also been reasonable enough. 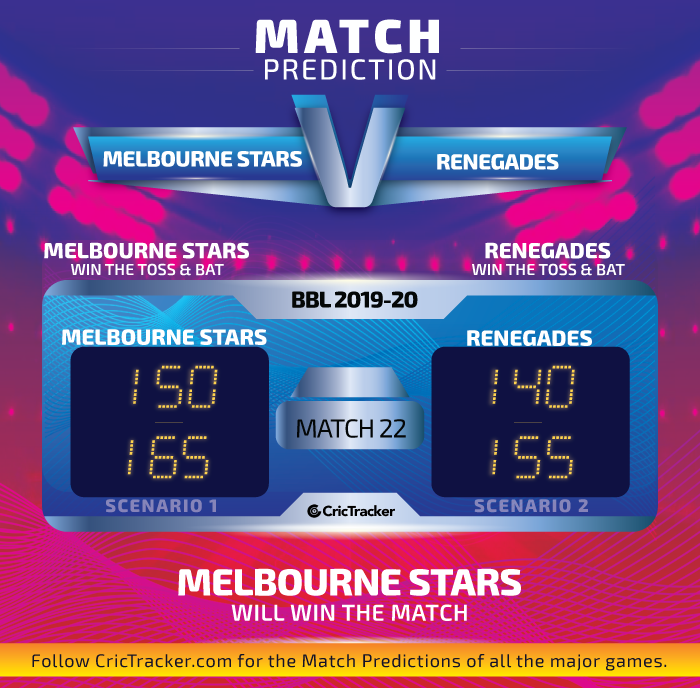