With the likes of D'Arcy Short, Riley Meredith not playing this game, there shouldn't be much problem in terms of credits.

The 29th game of the Big Bash League (BBL) 2019-20 will be played between Brisbane Heat and Hobart Hurricanes at The Gabba in Brisbane.

The in-form Brisbane Heat host the Hobart Hurricanes in the match 29 of the ongoing BBL season. This is the second clash between the two sides with the Chris Lynn-led side coming up trumps in the previous face-off comfortably. In terms of the points and the matches played, both the teams are only separated on net run-rate.

The Heat are coming off a win over the Sydney Thunder, the game which was affected by rain. On the other hand, the Hurricanes too got the better of the Perth Scorchers in their erstwhile and it will be about carrying the momentum for both the teams. Matthew Wade is set to return for the Hurricanes though while Joe Burns has joined Brisbane ahead of this clash.

It will be cloudy to start with in the morning on Thursday in Brisbane. However, the sun will come out later. But by the intermittent clouds will hover over The Gabba around 7 PM local time. Having said that, there is no chance of rain interrupting the action with the temperature expected to hover around 25-27 Degrees Celsius.

The Gabba is hosting a BBL game after a gap of three weeks. The hosts lost the season opener played at the venue. The surface tends to slow down a bit in the latter half of the game. The spinners picked six wickets out of 10 which fell in the second innings in the previous game. The team winning the toss is expected to bat first.

Average first innings score: 172 (Only match played at the venue this season)

Joe Burns has been included in the 13-man squad for the Brisbane Heat. He replaces Cameron Gannon in the line-up.

Matthew Wade has returned to Hobart Hurricanes as captain after the end of the Test series between Australia and New Zealand. He has replaced D’Arcy Short in the squad who will join the national team for the upcoming India tour.

Wade will play as a pure batsman while Ben McDermott continues to be the wicket-keeper.

Riley Meredith is not available for this match due to side strain. He is expected to be out of action for four to six weeks. David Moody replaced him in the squad.

Bash Brothers 2.0 – Tom Banton and Chris Lynn – are the must in your Dream11 Fantasy team. Renshaw is another exciting pick and only if it is a 20-over game, then his all-round skills can be effective. Swepson, Laughlin and Lalor are other good bowlers in the Heat line-up.

Matthew Wade and Caleb Jewell are the only batsmen from the Hurricanes who might make an attempt. With the ball, Qais Ahmad and Nathan Ellis are likely to be effective and can earn decent Fantasy points. 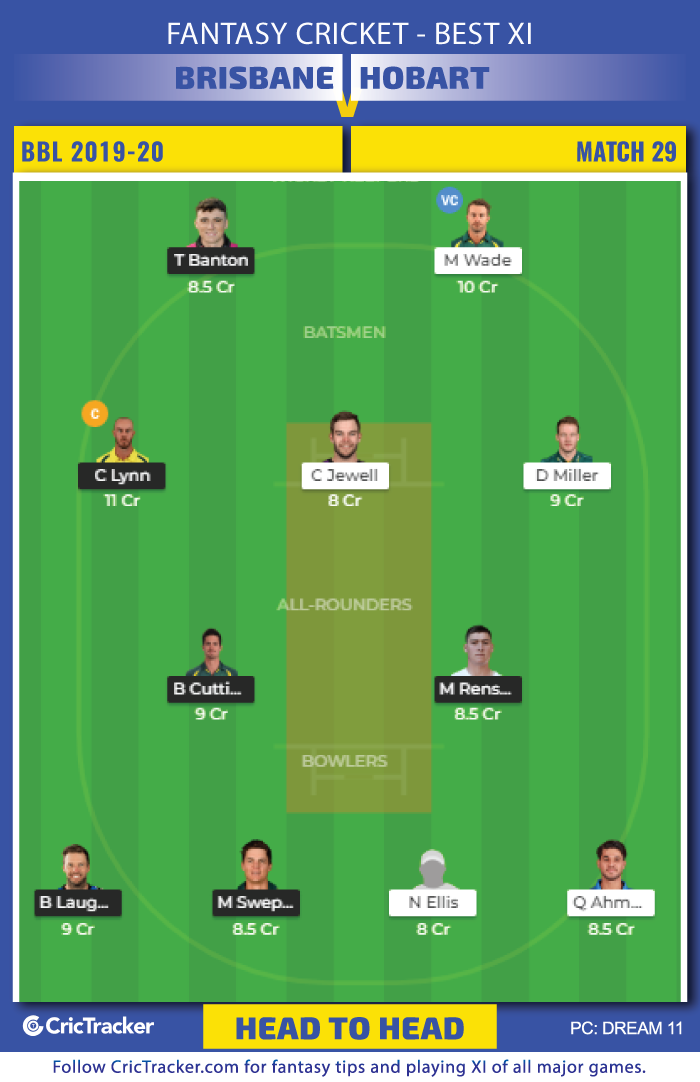 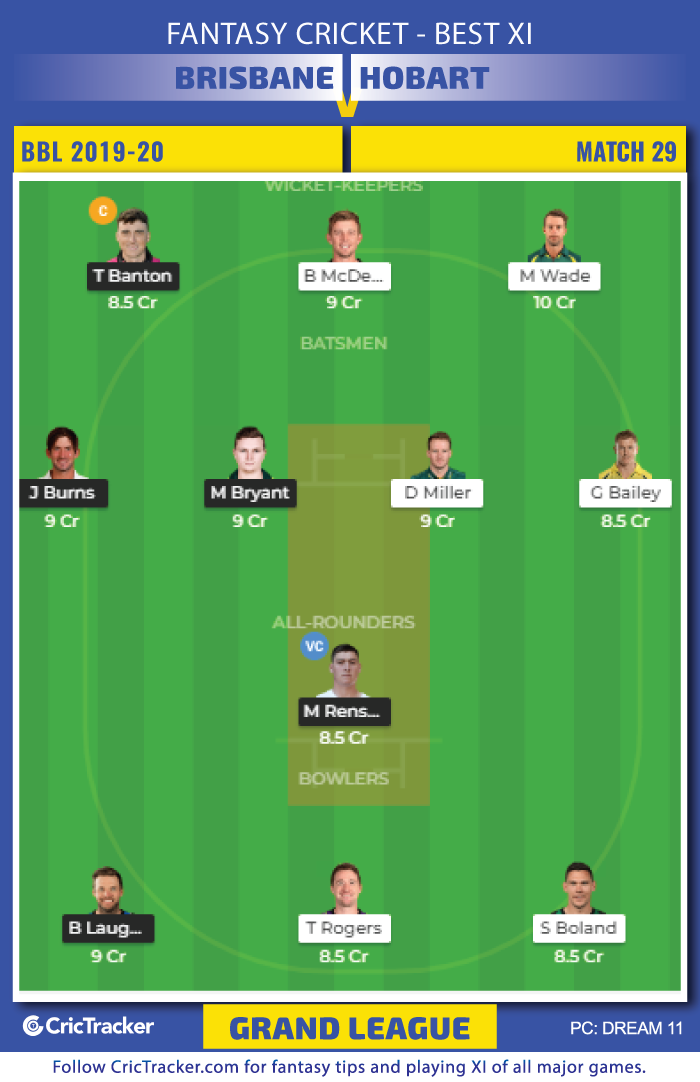 With the likes of D’Arcy Short, Riley Meredith not playing this game, there shouldn’t be much problem in terms of credits. Rather there are not many quality players in the batsmen category who could be picked. Pick your bowlers wisely in that case.