The likes of Tom Curran and Glenn Maxwell have contributed with both bat and ball throughout the season.

The 34th match of the 2019-20 Big Bash League will be played between Melbourne Stars and Sydney Sixers at the Melbourne Cricket Ground in Melbourne. This match will be live on Sony SIX and Sony SIX HD. Live Streaming will be available on Sony LIV.

We are gradually moving towards the business end of the Big Bash League. And, in a bid to consolidate their position at the top of the table, Glenn Maxwell’s Melbourne Stars will lock horns with the second-placed Sydney Sixers at the iconic Melbourne Cricket Ground.

With seven wins in eight games, the Melbourne Stars are at the top of the pile and are well and truly, looking the team to beat in the competition. Their latest win- against the Melbourne Renegades- was championed by the charismatic Glenn Maxwell, who scored a whirlwind 45-ball 83- an innings which included seven sixes and a solitary boundary.

They’ll now face an equally in-form side in the form of Sydney Sixers, who are currently placed at the second spot in the points table. The Sixers come into this game on the back of a two-wicket win over the Adelaide Strikers, a win which was spearheaded by an all-round bowling effort- led by Tom Curran’s 4/22.

It is expected to be an overcast day in Melbourne on Sunday. According to AccuWeather, dark clouds are to set to play hide and seek around Melbourne throughout the day. While the temperature is set to fluctuate between 14-20 degrees Celsius, the humidity is set to hover around 64%. Moreover, there is a 20 percent chance of rain.

The pitch at the Melbourne Cricket Ground has proved to be a great one for T20 cricket this season. Batting has proved to be a significantly easier proposition on the second innings as compared to the first, with the ball coming onto the bat nicely. Both sides will be looking to bowl first on Sunday.

Average first innings score:– 144 [In the two games at the venue this season]

The Melbourne Stars have made two changes to their 13-man squad for Sunday’s encounter against the Sixers. Jackson Coleman and Jonathan Merlo have been added in the squad in place of Sam Elliot and Nathan Coulter-Nile.

Sydney Sixers have made one change to their squad that beat the Adelaide Strikers in the last game. Regular captain Moises Henriques comes into the set-up replacing Josh Hazlewood, who is currently on national duty. 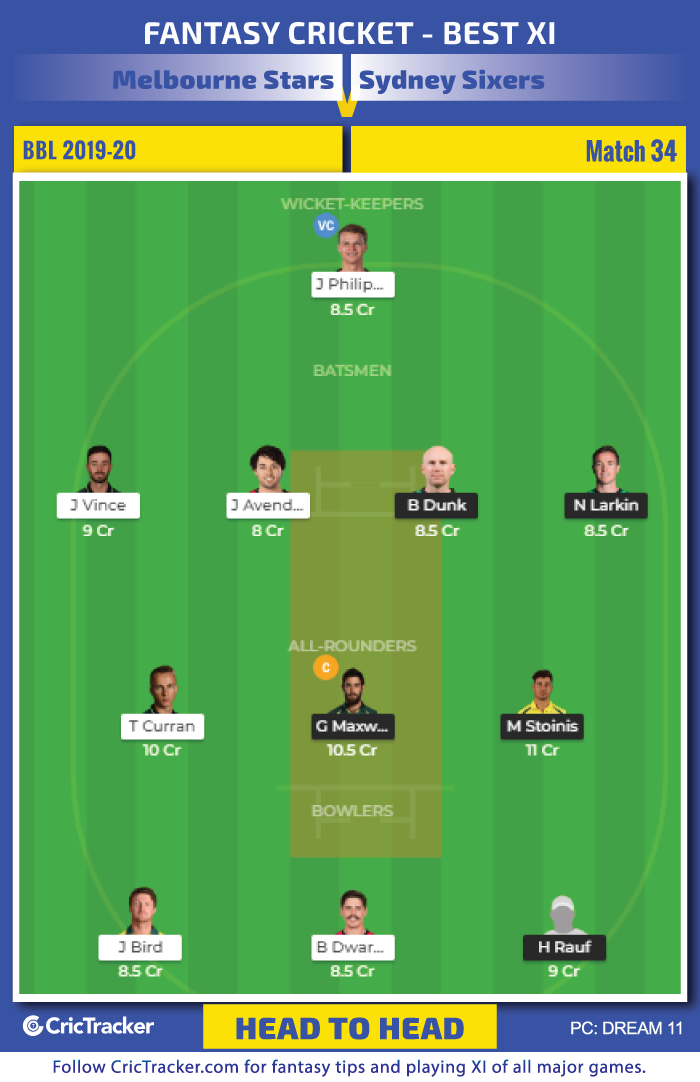 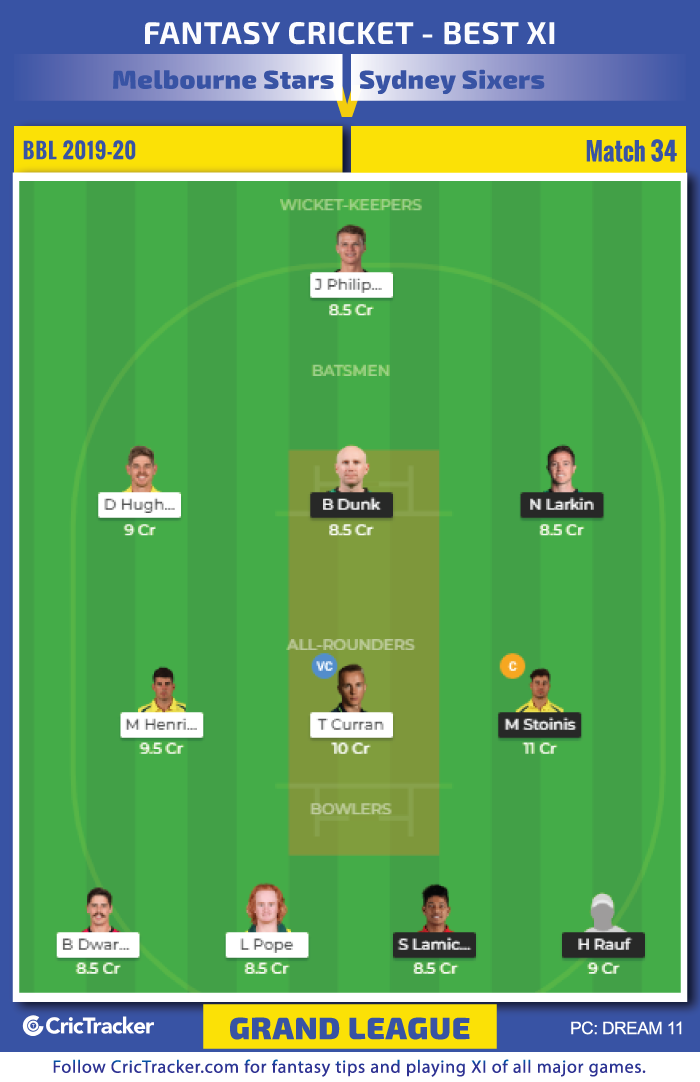 The likes of Tom Curran and Glenn Maxwell have contributed with both bat and ball throughout the season. Hence, opting for them as captain/vice-captain in your small-league team can be worth a punt.

Melbourne Stars is expected to come out as the winners.