Both sides have got good top-order batsman. Hence, opting for the likes of Alex Hales or Shaun Marsh can be a good punt.

The 37th match of the Big Bash League (BBL) 2019-20 will be played between Melbourne Renegades and Sydney Thunder at the Manuka Oval in  Canberra.

We are gradually moving towards the business end of the Big Bash League, and the 37th game will see defending champions Melbourne Renegades lock horns with Sydney Thunder. With nine defeats in as many fixtures, the Renegades are all-but-out of the competition and will be looking to break the unwanted streak. They come into this game on the back of 63-run shellacking at the hands of Adelaide Strikers after they were bundled out for 110.

Sydney Thunder, on the other hand, come into this fixture on the back of a four-wicket win over Hobart Hurricanes after they successfully chased down 163 thanks to a whirlwind 96-run opening stand between Usman Khawaja [35] and Alex Hales [55].

It is expected to be a cloudy day in Canberra on Wednesday. According to the weather-report, dark clouds are to set to hover around the city throughout the day. While the temperature is set to fluctuate between 16-29 degrees Celsius, the humidity is set to hover around 40%. Moreover, there is a 40 percent chance of rain.

The only game held at the Manuka Oval this season was abandoned due to smoke caused due to the bushfires. In that game, the Strikers racked up 5-161 with the likes of Daniel Sams and Chris Morris being among the wickets. With the rain forecasted for Wednesday, the fast bowlers may have their say again.

Average first innings score:– 161 [In the only game at the venue this season]

The Melbourne Stars have made just one change to their touring party. Nathan McSweeney has been replaced by paceman Andrew Fekete.

Sydney Thunder have made three changes to their squad. Lenton, Gurinder Sandhu and Nathan McAndrew in for Gilkes, Hatcher and Tremain.

Melbourne Renegades– Shaun Marsh, Beu Webster, and Sam Harper have been among the runs for the Renegades this season, and they will once again be the key to their fortunes on Wednesday. As far as bowling is concerned, Cameron Boyce and Joe Mennie will be the key.

Sydney Sixers– Alex Hales [55] and Usman Khawaja were instrumental in leading their side to the target to 163 in the last game. Daniel Sams, who is the leading wicket-taker of the tournament- 17 wickets at 14.76-  will lead the bowling unit along with Chris Morris and Brendon Doggett. 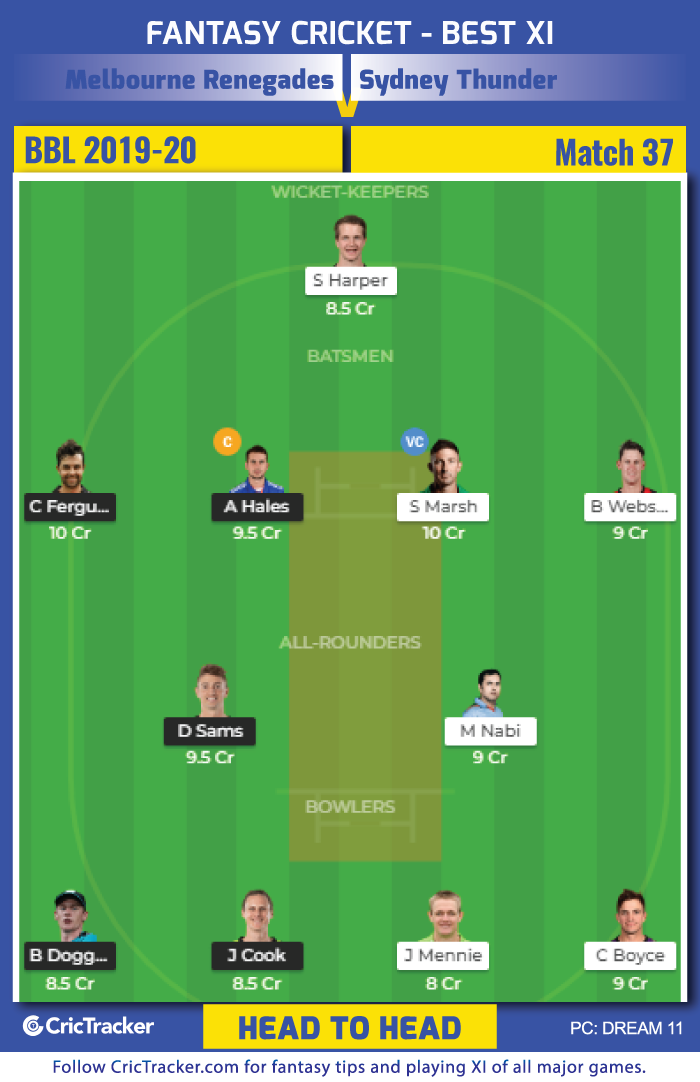 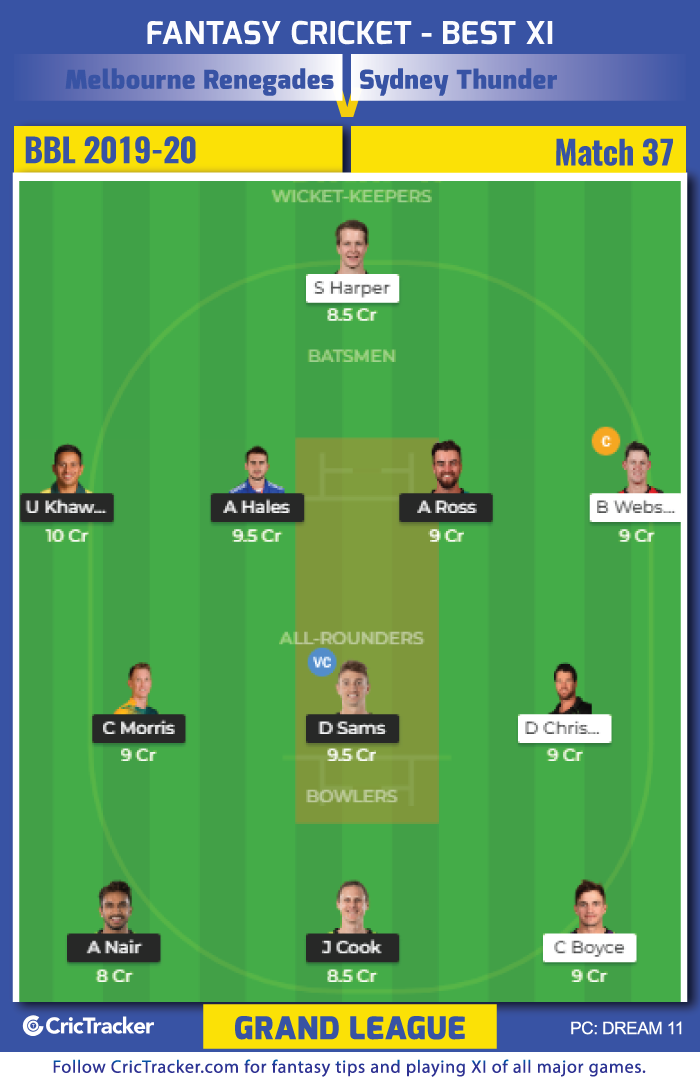 Both sides have got good top-order batsmen. Hence, opting for the likes of Alex Hales or Shaun Marsh can be a good punt.

Sydney Thunder is expected to come out as the winners.