Nathan Lyon has returned to the Sixers, replacing Ben Manenti.

The Sydney Thunder started the BBL 2019-20 with a couple of resounding victories. But their campaign has fallen apart ever since. Callum Ferguson and Co are now placed sixth on the points table with nine points from 10 matches. A victory in their next match may even take them to fourth in the table. The Thunder’s upcoming game is against the Sydney Sixers at the Showground Stadium.

On head-to-head, the Sixers have dominated the Thunder, winning 11 times out of 16 encounters. The Sixers are in riveting form in the ongoing BBL as well. Having garnered 13 points from 10 matches, Moises Henriques’ men are second on the table below Glenn Maxwell’s. Melbourne Stars. Their previous match against Hobart Hurricanes at the Sydney Cricket Ground was washed off due to rain.

The pitch in Sydney is pretty good for batting and it has favoured the team, batting second. Hence, chasing should be the way forward for the teams. There are around 50 per cent chances of rain to go with thunderstorms during game time. The clouds will be there throughout. The temperature will be around the 21 degrees Celsius mark. The humidity will mostly be in the mid-80s.

The Thunder haven’t changed their 13-man squad despite the defeat. Usman Khawaja and Alex Hales have 254 and 247 runs respectively. The onus will be on the duo to give their team a decent start. Callum Ferguson and Alex Ross have to step up in the middle order. In bowling, Daniel Sams is their leading wicket-taker with 17 scalps. He has gotten support from Chris Morris with 11 wickets.

The Sixers have left out Henry Thornton and Ben Manenti. The duo has been replaced by Nathan Lyon and Mickey Edwards. Lyon has been recovering from a thumb injury that he suffered in the New Year’s Test against Australia. Josh Phillipe will hold the key in the batting lineup. But will need support from the others. Tom Curran and Ben Dwarshuis are among the wickets with 24 wickets. 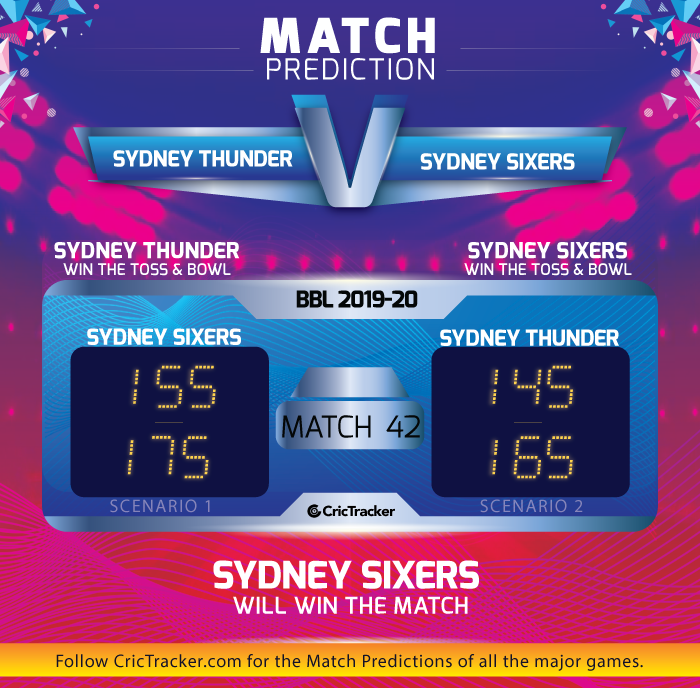