Heat will be eager to break into the top half of the points table as they will be bolstered by the arrival of AB de Villiers in their squad.

The extravaganza and thrill of BBL 2019-20 continue with another fascinating encounter as Brisbane Heat lock horns with Melbourne Renegades in Match 44 of the tournament.

Brisbane Heat have had a topsy-turvy campaign so far in the tournament. The Chris Lynn-led side has registered five wins out of their 10 matches and are currently poised fifth in the points table. Heat will be eager to break into the top half of the points table as they will be bolstered by the arrival of AB de Villiers in their squad. All eyes will be on the Proteas stalwart to enthral the audience in the match.

In the previous match against Adelaide Strikers, Heat’s batting force collapsed on a meagre score of 100 runs. No other batsman apart from Matt Renshaw (43) was able to stay in the middle for a prolonged period of time. Chris Lynn and Co will be hoping to retaliate against Melbourne Renegades.

Melbourne Renegades have failed to live up to their expectations so far in the season. Despite being equipped with a robust squad, Renegades have registered only one victory so far in the tournament. In their previous game against Sydney Thunder, Renegades registered their first victory of the tournament by registering a 12-run victory. The top-order trio of Shaun Marsh, Marcus Harris and Sam Harper propelled Renegades to a flying start. Skipper Dan Christian also led his side from the front by scalping three wickets of Sydney Thunder.

In the three matches hosted by the Gabba this season, no team has touched the 200-run mark. Considering the batting depth of both the sides, a mammoth total might be on the cards. The temperature at Gabba is expected to hover around 29 degrees Celcius with high chances of rain to intervene in the match, according to Accuweather. High levels of humidity are also anticipated during the course of play.

Brisbane Heat is equipped with many explosive batsmen in their batting line-up. Max Bryant and Chris Lynn will be aiming to propel Heat to a flying start. Matt Renshaw has also delivered notable performances this season. Furthermore, AB de Villiers also has the potential to enthral the audience with his explosive hitting. James Pattinson and Mujeeb Ur Rahman will be heading their bowling force.

Melbourne Renegades are equipped with many top-order batsmen in their arsenal who can provide them with a flying start. Sam Harper, Marcus Harris and Beau Webster have also delivered impressive performances with the bat lately along with veteran Shaun Marsh. Skipper Dan Christian, who scalped three wickets in his last match, will be eager to replicate his performance. Christian will be assisted by Mohammad Nabi and Cameron Boyce in the bowling department. 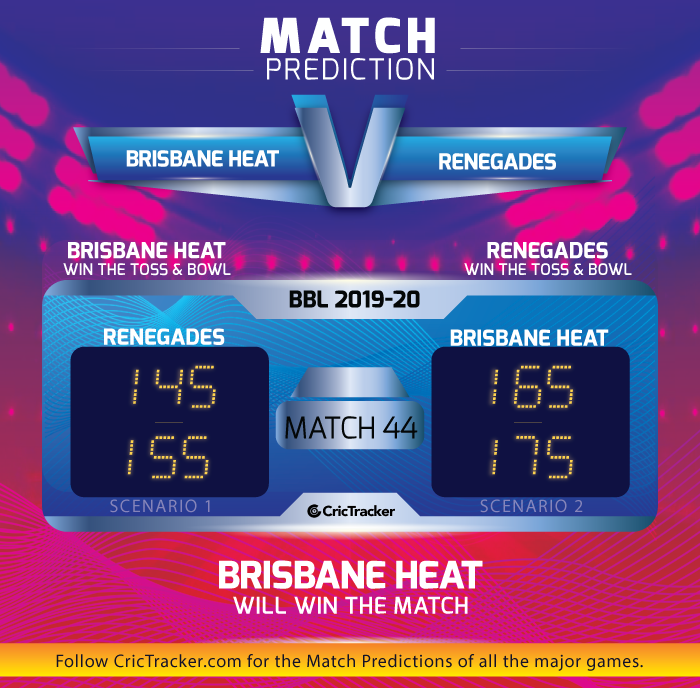