The return of Zampa and Handscomb from the India tour will help Melbourne Stars to bolster their squad.

As the journey of BBL 2019-20 progresses into its business end, Adelaide Strikers and Melbourne Stars lock horns in Match 48 of the fast-paced league.

Melbourne Stars have been in phenomenal form this season and are currently placed at the top of the table. The Glenn Maxwell-led side has registered ten wins out of twelve matches and has gathered 20 points on the board. Stars have a star-studded line-up with many match-winners in their squad. Marcus Stoinis has also been in phenomenal form this season along with skipper Maxwell. However, in their previous match against, Stars had to suffer a 21-run defeat against Sydney Sixers.

Sixers’s skipper Moises Henriques steered his side to a competitive total by smashing 72 runs off just 31 deliveries. Coming on to Melbourne Stars’ chase, in-form Marcus Stoinis continued his run-scoring spree by smashing 62 runs while opening the innings. However, no other batsman could propel Stars to the target of Stonis’ departure as the Glenn Maxwell-led side could gather only 125 runs on the scoreboard.

Adelaide Strikers also in decent touch as they have gathered 13 points by winning six matches so far and are currently poised third in the points table. In their previous match against Hobart Hurricanes, Strikers posted a massive total on the board on the back of some individual batting performances.

Skipper Travis Head smashed a quick-fire 79 that included 6 sixes and 5 fours. He was assisted by Jonathan Wells, who scored an unbeaten knock of 45 runs to propel Strikers to a total of 186 runs. Wes Agar was the pick of Strikers’ bowlers as he scalped four wickets to ensure that Hurricanes don’t achieve the target.

The pitch in Adelaide has been a belter for batting thus far. Hence, a high-scoring encounter is on the cards considering the batting depth of both the teams. In the previous match played at this wicket, Adelaide Strikers’ showcased an explosive batting approach as Salt (67) and Weatherald (33) guided Strikers to the victory. The weather is expected to be cloudy with the temperature hovering around 25 degrees Celcius, according to Accuweather.

Skipper Travis Head and Jonathan Wells will be aiming to continue their prolific run-scoring form. Strikers also have Rashid Khan in their arsenal, who has the potential to turn the course of the match with his explosive batting and spin variation. Wes Agar, Liam O Connor and Michael Neser had also delivered impressive bowling performances this season. Agar, who scalped four wickets in his previous match, will be hoping to replicate his performance. Moreover, Alex Carey has also returned to the squad after touring India.

Marcus Stoinis and Glenn Maxwell will be eager to emerge as the match-winners for Stars. Both the all-rounders have delivered impressive performances for Stars this season. Moreover, the return of Zampa and Handscomb from the India tour will help Stars to bolster their squad. Sandeep Lamichhane, who picked up two wickets in his previous match, will be heading Stars’ spin bowling attack. 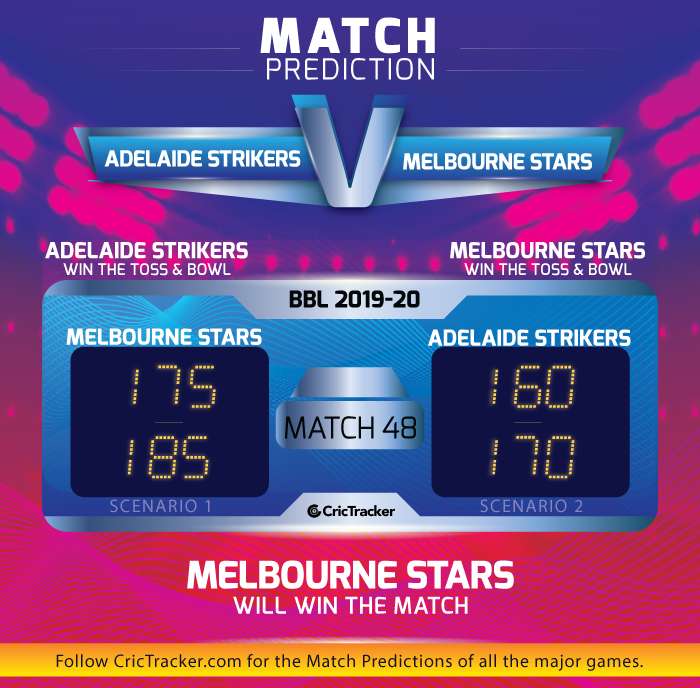