The track at the Perth Stadium offers good bounce and the likes of Billy Stanlake, Rashid Khan could prove to be a real handful on that pitch.

The 51st match of the 2019-20 Big Bash League will be played between Perth Scorchers and Adelaide Strikers at the Perth Stadium in Perth.

It will be a battle of two heavyweights on Friday as Perth Scorchers play hosts to Adelaide Strikers at the Perth Stadium on Friday night. Both sides are coming off a clinical win in their previous encounter and with the tournament approaching its business end, they’ll be looking to solidify their position in the upper echelon of the points table.

Perth Scorchers, who are currently placed at the fourth spot in the points table and they’ll be looking to narrow their gap with the third-placed Adelaide Strikers, who currently have 15 points to their name. The Scorchers come into this game after having absolutely steamrolled Sydney Thunder in their previous fixture thanks to another century-stand [136] between Josh Inglis [58] and Liam Livingstone [78], paving way for an easy eight-wicket win in their run-chase of 154.

The task wouldn’t be as easy though as they’ll face a red-hot Adelaide Strikers unit, who come into this game on the back of a three-match winning streak. Their last win came at the expense of the table-topper Melbourne Stars after an all-round bowling effort-led by Peter Siddle’s four-wicket-haul helped them defend their total of 162.

It is expected to be a bright and sunny day in Perth on Friday. According to AccuWeather, the Western Australian city is set to be bathed in sunshine throughout the day, making it a perfect day for T20 cricket. While the temperature is set to be between 19 and 30 degrees Celsius, the humidity is set to hover around 42%. Chances of rain- minimal.

With the weather set to be bright and sunny on Friday, one can expect another high-scoring game in Perth. Barring the game in which the Scorchers were bowled out for 86, Perth has seen high-scoring games with the highest score being 213.

Average first innings score:– 167 [In the 6 completed games at the venue this season]

Perth Scorchers have been bolstered by the addition of Ashton Turner and Ashton Agar to their set-up.

Adelaide Strikers have retained the same 13-member squad that beat Melbourne Stars in their last fixture.

Perth Scorchers- The pair of Josh Inglis and Liam Livingstone have been the bedrock of Scorchers batting unit this season. They will once again pose a great threat to the opposition bowlers.

With the addition of Ashton Turner and Ashton Agar in the squad, the Scorchers have bolstered their lower middle-order. Add, Mitchell Marsh alongside Turner and Agar and the trio can cause serious damage at the backend. Turner could also prove handy with the ball in a bowling attack that will be spearheaded by Chris Jordan and Jhye Richardson.

Adelaide Strikers- One of the reasons for the success of Adelaide Strikers this season is they haven’t depended on one man to run the show. At various stages, different players have chipped-in, as we saw in the last game when Jonathan Wells [55*] and Matthew Short [23*] propelled the Strikers to an eventual match-winning total of 4-162 after an early hiccup.

But, they’ll hope that the top-order- Jake Weatherald, Philip Salt, Travis Head, and Alex Carey- shrugs of the blip of the last game and get back to what they have been doing throughout the tournament- score runs.

Peter Siddle claimed four wickets with each of Wes Agar [2-30], Michael Nesser [1-26], Rashid Khan [1-24] chipped in. Billy Stanlake [0-32] had a rare off day but the conditions at Perth will suit him, and he could well turn out to be the spearhead of their bowling unit. 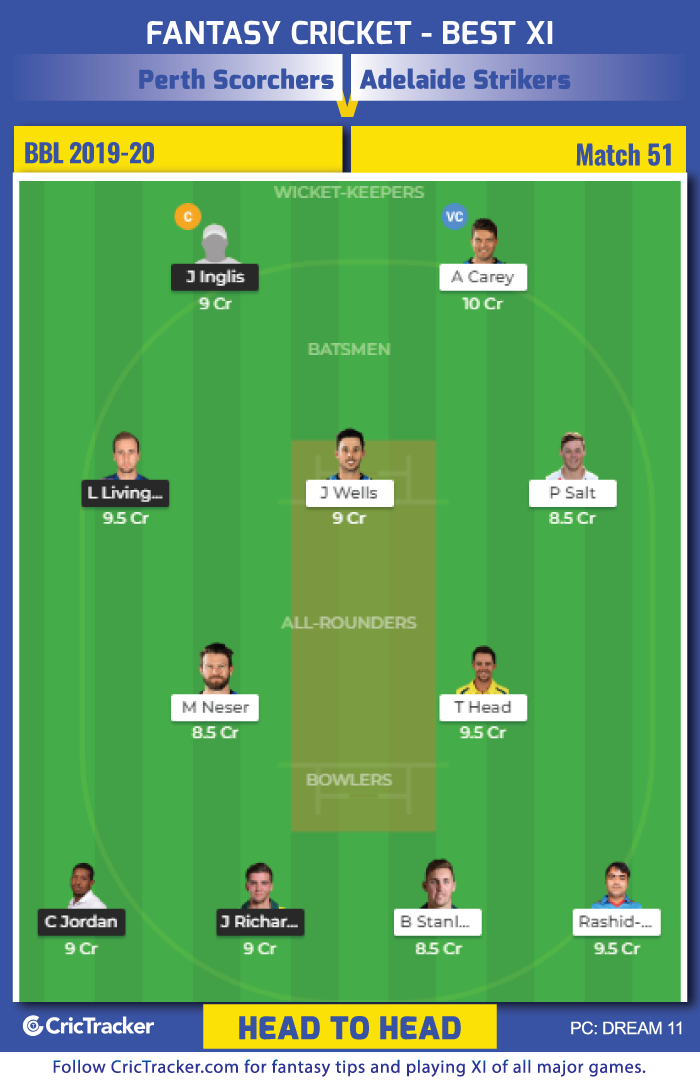 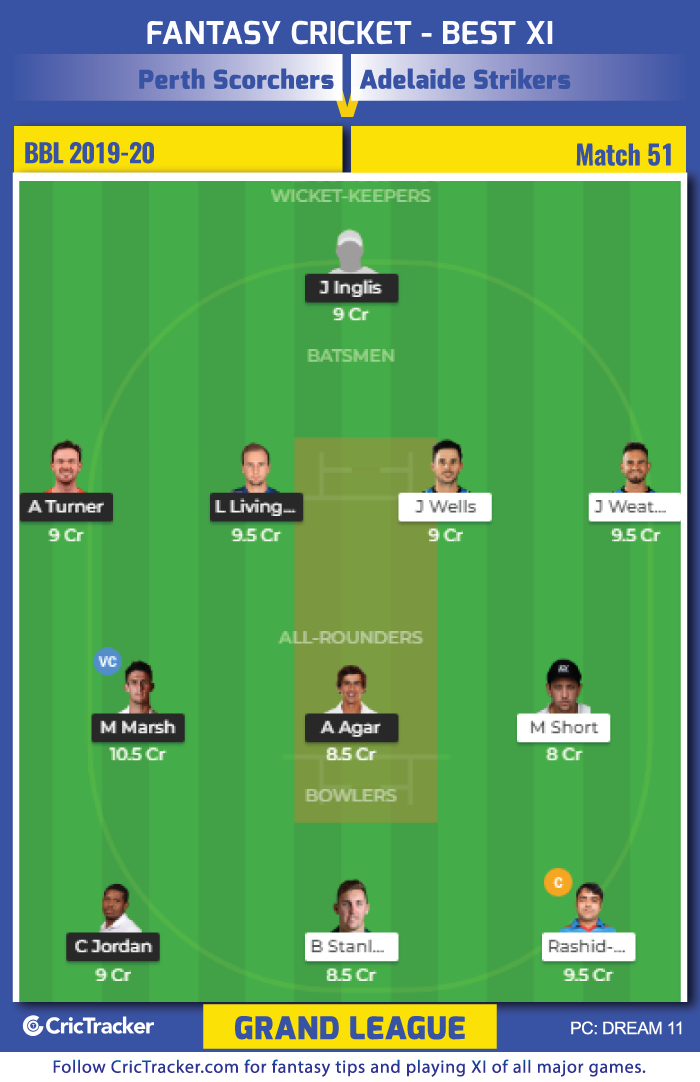 The track at the Perth Stadium offers good bounce and the likes of Billy Stanlake, Rashid Khan could prove to be a real handful on that pitch. You can pick them as captain/vice-captain in your Grand League team.