The Chris Lynn-led side has suffered three consecutive defeats and will be aiming to retaliate in their remaining two matches of the tournament.

As the journey of BBL 2019-20 is drawing close to its culmination, Melbourne Stars and Brisbane Heat are set to lock horns in Match 53 of the tournament. Melbourne Stars have had an exceptional season so far and have already qualified to the playoffs. The Glenn Maxwell-side has delivered consistent performances throughout their campaign and are currently sitting at the top of the points table.

However, in their previous match in the league against Adelaide Strikers, Stars had to suffer an 11-run defeat as they failed to hunt down the target of 163 runs. Peter Handscomb, who smashed 65 runs off 39 delivers, was the pick of Stars’ batting force. However, no other Stars’ batsman was able to stick on the wicket along with Handscomb. Glenn Maxwell and his troops will be eager to snap up another win before the playoffs.

Brisbane Heat, on the other hand, have had a mediocre campaign this season. Due to inconsistent performances, Heat have registered only five wins in twelve matches and are currently poised sixth in the points table.

The Chris Lynn-led side has suffered three consecutive defeats and will be aiming to retaliate in their remaining two matches of the tournament. In their previous match against Sydney Sixers, Heat exhibited a poor batting display as they could only amass 126 runs on the board in stipulated 20 overs. Apart from AB de Villiers (25) and James Pattinson (27), no other batsman could go past the 20-run mark.

The previous encounter at MCG wasn’t a high scoring one as either team could not hit the 150-mark on the scoreboard. However, considering the batting force of Melbourne Stars and Brisbane Heat, a competitive total might be on the cards. The weather is anticipated to be mostly sunny during the course of play. The temperature is expected to hover around 21 degrees Celcius according to AccuWeather, along with moderate levels of humidity.

Marcus Stoinis and Glenn Maxwell have been consistent performers for Stars this season. Both the all-rounders have delivered match-winning performances for Stars this season. Stars have also included Dilbar Hussain as the replacement of their in-form pacer Haris Rauf, who is out due to international duties. Nathan Coulter-Nile is also added to the squad to bolster their bowling attack.

Despite having a robust batting force, Heat have failed to capitalize on its potential. The likes of AB de Villiers, Chris Lynn and Marnus Labuschagne will be hoping to play a big knock for Heat. Heat’s bowling force will be steered by James Pattinson, Ben Laughlin and Mujeeb Ur Rahman. All-rounder Ben Cutting also has the ability to turn the match in his side’s favour by delivering in both the departments. 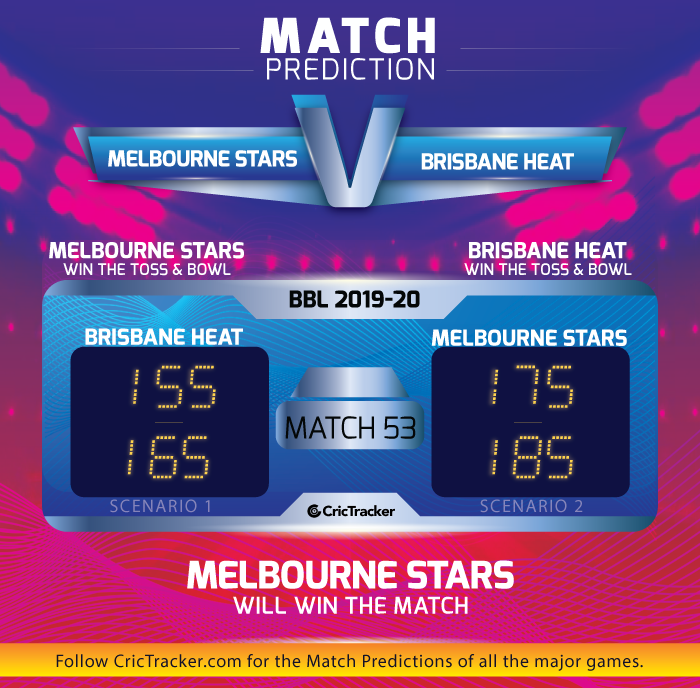