Tom Banton is suffering from a virus and has been replaced by Jack Prestwidge.

Sydney Sixers won the toss and elected to field first.

The 9th match of the Big Bash League (BBL) 2019-20 will be played between Sydney Sixers and Brisbane Heat at the Sydney Cricket Ground in Sydney.

Brisbane Heat has suffered two back to back defeats so far in Big Bash League 2019-20. They would be eager to get back on the winning track in the upcoming match against Sydney Sixers. They boast a strong batting line-up that comprises of Max Bryant and Chris Lynn in the top order.

But, the formidable trio is yet to perform as a team. If two out of three managed to click a good knock then the chances of Heat winning the match will be quite high. However, their bowling has done a decent job in the ongoing tournament and will look to replicate their form against Sixers as well.

Sydney Sixers are currently ranked fourth in the points table with two points. They will look to grab some important points and improve their ranking in the leaderboard. With the likes of Josh Philippe, James Vince and Daniel Hughes their chances are high to outclass the out of form Heat.

With no chances of rain, it is expected to be a perfect day for a cricket match. However, the temperature is expected to deviate between 20 and 24 Degree Celsius according to Accuweather.

The track at Sydney Cricket Ground will be favourable for the batsmen with spinner coming into the picture in the latter part of the game. However, batsmen will look to pile some big runs in the batting-friendly conditions. On the other hand, the team winning the toss will look to the field because teams have found it difficult to chase at this venue.

Tom Banton is suffering from a virus and has been replaced by Jack Prestwidge.

Josh Philippe is in good form for Sydney Sixers, who has mustered 105 runs in his last two outings and will be an important player to watch against Heat. Mitchell Swepson looks effective with the ball and in spin-friendly conditions, he will look to get some wickets when he will play against Sixers. 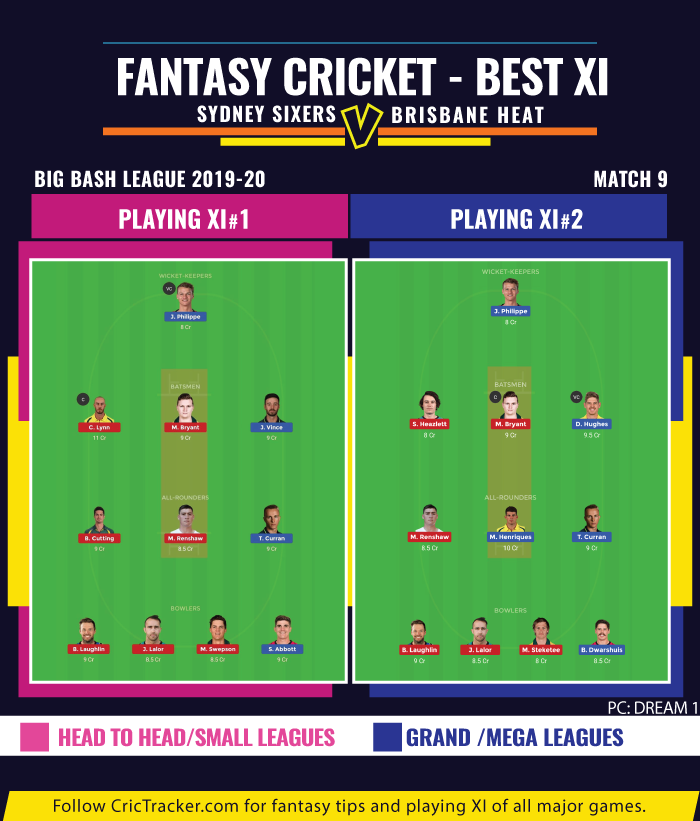 Chris Lynn is known for his hard-hitting and is an extraordinary opener on his good days. Currently, he is in bad form with the bat but can be a dangerous player in the upcoming match. Looking forward to his form, he could be a risky pick but will be worth for any Grand League Side.

Brisbane Heat are expected to win the match.