Who will win the title?

The defending champions Sydney Sixers will be locking horns with Perth Scorchers in the grand finale of this years’ Big Bash League (BBL) at Docklands Stadium in Melbourne on Friday. However, what really stands out is that both teams are set to renew their rivalry in the summit clash. In fact, the two teams had competed in last season’s final as well with the Sydney outfit coming out on top by 27 runs to win their third title.

The Sixers lost the Qualifier match against the Perth Scorchers by 48 runs but, the reigning champions bounced back in style by registering a four-wicket win in the Challenger to seal a third straight final berth and renew their rivalry with the Scorchers.

Plenty of records will be shattered at the Big Bash League 2021/22 final as the Sydney Sixers and Perth Scorchers who are tied at three titles each will be competing for a record fourth crown. Meanwhile, the two teams are also tied at 2-2 as far as their records in the deciders are concerned.

The deadlock will be broken on Friday as they will be facing off in the finale for the fifth time. As far as their title wins are concerned, Sydney Sixers have won thrice in 2011, 2020, and, 2021 while the Perth Scorchers have emerged triumphant in 2013, and, 2014, and, 2016 seasons respectively.

The teams batting first have come out on top on most occasions in the tournament and therefore, the captain winning the toss would certainly be looking forward to making the first use of the wicket and posting a stiff total as the chasing team could get carried away by the scoreboard pressure in a crunch knockout game.  The Marvel Stadium has a batting pitch with a par score of around 160.

Moises Henriques, who is captaining the title-holders has indeed led his team exceptionally well from the front as he has had a dream season on the 22 yards having amassed 433 runs in 14 innings at a strike rate of 136.80 and averaging 42 including a couple of half-centuries. He will have to lead from the front one final time to seal the Sixers’ second successive title.

Ben Dwarshuis has been the standout bowler for the defending champions picking up 13 wickets in 17 matches. He is a brilliant bowler in the final few overs of the innings and can also contribute with the bat down the order. 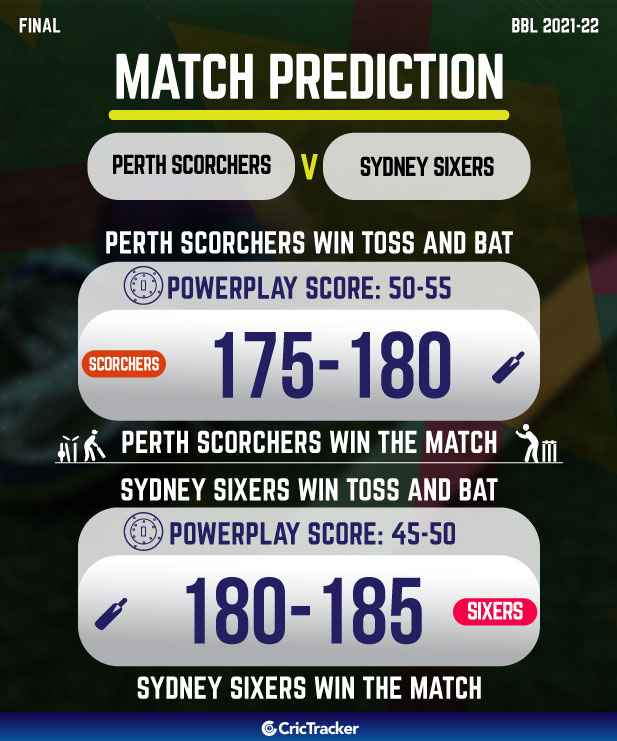