Perth Scorchers have won the previous battle against Melbourne Renegades by 21 runs. 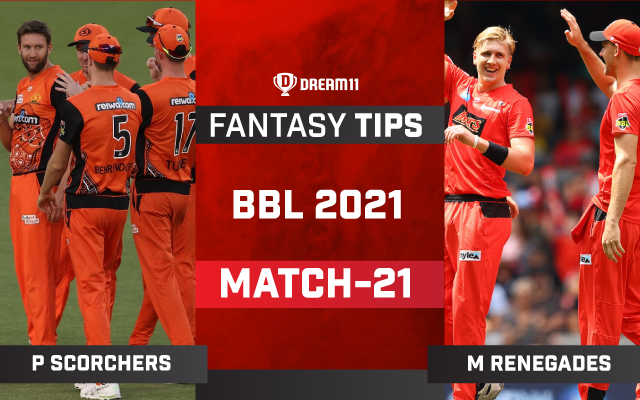 Perth Scorchers will take on Melbourne Renegades in the 21st match of the BBL 2021-22 on Sunday. Perth Scorchers are extending their unbeaten streak in this tournament. Perth Scorchers are making things look simple in this competition and convincingly won all their matches. Without any doubt, they are at the top of the standings with 17 points.

Melbourne Renegades, on the other hand, are undergoing a tough phase in this tournament. They started well with 2 runs win over Adelaide Strikers but thereafter they lost 3 matches on the trot. They need to regroup themselves and play their best cricket if they want to move in the points table. Currently, they are at the bottom of the table in the standings with 4 points.

It’s a complete dead batting surface with no help for the bowlers. The boundaries are way too short. Bowlers need to come up with better plans in order to contain runs on this batters paradise. Batting first is an excellent option here.

Aaron Finch in his comeback match scored a scintillating half-century against Scorchers. He ended his innings after scoring 68 runs from 43 balls.

Mitchell Marsh is in a brutal form in this tournament. He is making batting look extremely simple at the moment. In 3 matches, he has scored 207 runs at an average of 103.5 with the highest score of 100* and also picked up a wicket.

Andrew Tye had a bad day at the office against Renegades as he went wicketless. He is still the leading wicket-taker in this tournament with 10 scalps.

Kane Richardson is the pick of the bowler for Renegades. He has already bagged 9 wickets in 4 matches at an economy of 7.66 with the best figures of 4 for 32.

Cameron Bancroft is doing quite well at the top of the order for Scorchers. In the last 3 matches, he has scored 94 runs at an average of 31.33 with the best score of 45.

SCO vs REN Must Picks for Dream11 Fantasy Cricket: 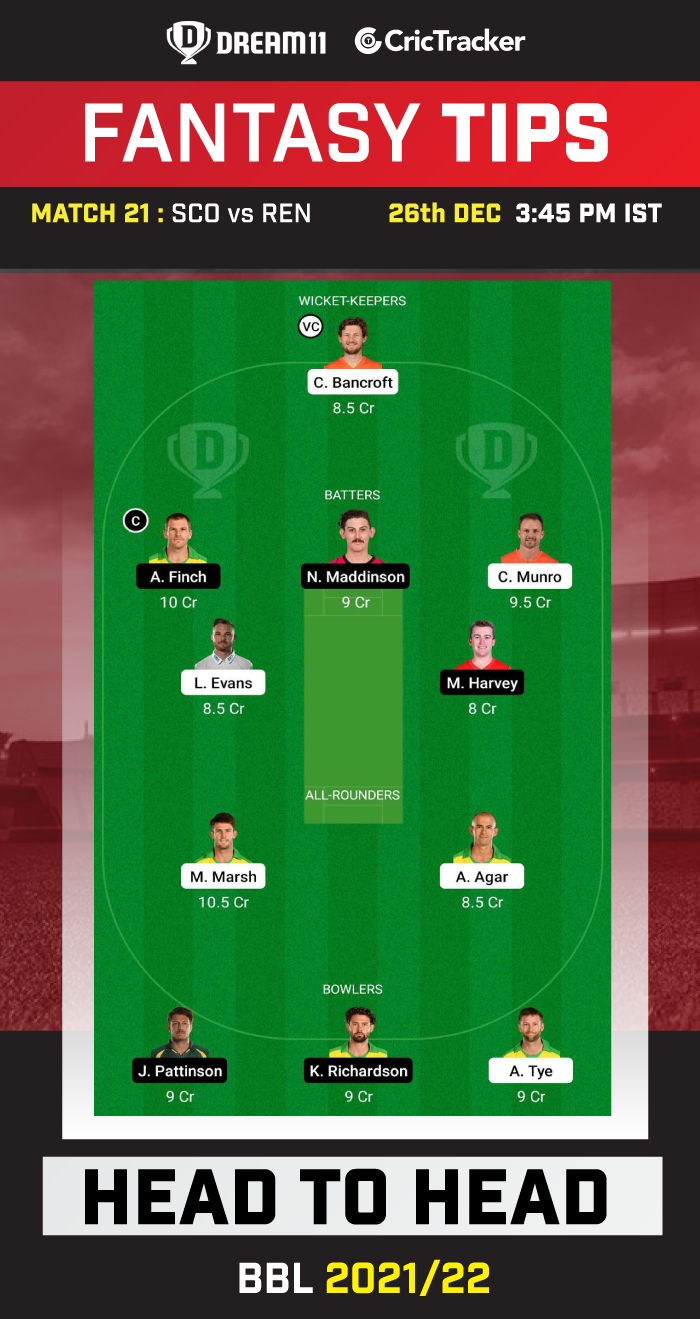 Josh Inglis has scored only 4 runs in the last 3 matches. It’s a bit risky to pick him as your fantasy team skipper.

Mohammad Nabi is yet to deliver big in this tournament. He has scored only 27 runs and picked up a wicket in the last 4 matches. You can take a risk and pick him as your fantasy team skipper.

Sam Harper will bat down the order and there will be less scope for him to score more points. Hence, it’s better to avoid him while making your fantasy teams.