Hurricanes have come out trumps four times in their last five meetings.

Brisbane Heat were lacklustre the other night against Adelaide Strikers and lost by five wickets courtesy of Alex Carey’s knock of 70 runs. Their bowlers did a decent job though, taking the match into the last over while defending a low score. In the next match of the 2018-19 Big Bash League, they would be up against Hobart Hurricanes, captained by Matthew Wade, last seasons runners-up.

The match will be played at the Carrara Oval in Queensland and it would be the first instance when these two teams would be playing together at the particular venue. In their last five meetings in the T20 tournament, the Hurricanes have got the better of Heat on four instances and therefore, Hobart are expected to have the upper hand psychologically going into the encounter.

The recent T20I last month between Australia and South Africa at this venue turned out to be a high-scoring affair. The encounter was also reduced to 10 overs per side owing to persistent rain. But the strip also showed its slow nature. Bearing in mind the factors, teams would want to bat first after winning the toss, also because both have strong bowling lineups in their armoury.

Heat are likely to draft in fast bowler Brendon Doggett in place of James Pattinson, who would be missing the match due to personal reasons. Chris Lynn and Brendon McCullum are the opening batsmen with Max Bryant to follow. Sam Heazlett and Joe Burns are the other batsmen. All-rounder Cutting and keeper Pierson would bat next. Mujeeb and Swepson form the spin-bowling duo.

Matthew Wade and Short are the opening batsmen with Ben McDermott slotted to bat at number three. The onus would be on skipper George Bailey to deliver in the middle-order. The batting has depth with Jofra Archer coming lower down the order. Archer will partner Meredith, Moody, and Milenko in the fast bowling department. Johan Botha and Clive Rose are the specialist spinners.

The prediction is for the Hobart Hurricanes to win their first game of the season. 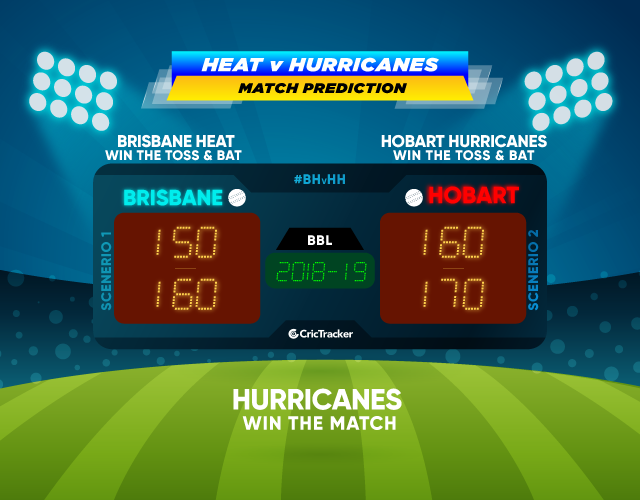