Indian off-spinner Ravichandran Ashwin has good news arriving for him with some good form. Ashwin was off color and was even dropped from the side, the intelligent bowler he is, reinvented himself and returned a better bowler. In the World T20 where India ended as the runners up was one of the leading wicket takers and helped India reach the finals.

The Offie has already won the Polly Umrigar Trophy best player award in 2012-13 season by the BCCI. Now Ashwin has been recommended by the Board of Control for Cricket in India (BCCI) for one of the highest sports awards the Arjuna Award this year.
In the latter half of 2013 Ashwin became the fastest bowler in 80 years to complete 100 test wickets in his 19th game against the West Indies at the Wankhede Stadium in Mumbai. He broke the record held by another off-spinner Erapalli Prasanna who reached the feat in 20 tests by making it there in one match lesser. The feat went unnoticed as it was a historic test match Sachin Tendulkar’s last International game. But, the recognition comes in the form of Arjuna Award nomination. 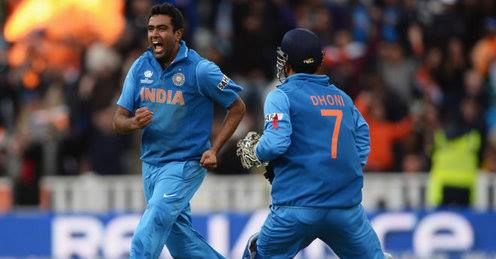 Ashwin, is also among the top ranked all-rounder’s in test matches also a cheeky contender with the bat in ODI’s and T20I. In his short yet famous career he has made enough reputation to be India’s spin head and lead the bowling attack on quite a few occasions having taken 104 wickets in Tests, 106 wickets in 79 ODI matches and 25 wickets in the 25 T20 internationals that he has played for India.

This news was confirmed when the BCCI General Manager Ratnakar Shetty said, “Yes, Ashwin has been recommended for the Arjuna Award before the April 30 deadline. No other cricketer has been recommended (for the awards),”
The BCCI confirmed of recommending a total of 46 cricketers, including women cricketers, have been conferred with the sporting honor. In the previous year young Indian batsman Virat Kohli was also nominated and later received the award.