The new season of CPL is set to start later next month. 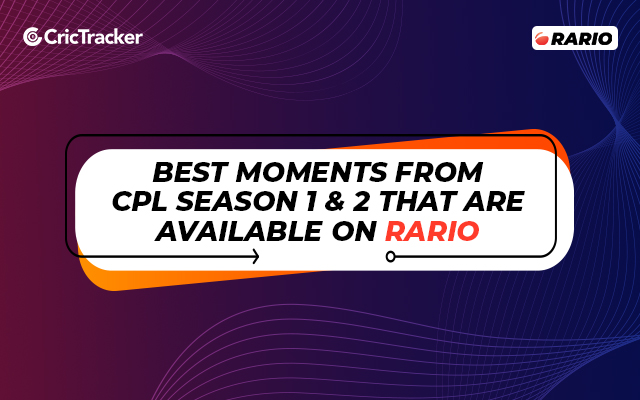 The Caribbean Premier League (CPL) was launched in 2013. From the very beginning, the tournament has been seeing top cricketing stars putting on their best performances to emerge on top. Rario, the cricket NFT giant, has partnered with CPL to make available the best moments from the league for cricket fans.

Let’s look at the most epic moments from CPL season 1 and 2 that would be soon available on the Rario marketplace:

In 2013 during the first season of CPL, Shakib Al Hasan bowled a record bowling spell at Kensington Oval. The left-arm spinner returned with the figures of 4-1-6-6 to hand his team a 4-wicket win. The Trinidad and Tobago Red Steel batters seemed to have no answers to Shakib’s wicket-to-wicket bowling.

He spun the web so well that Barbados Tridents captain Kieron Pollard had to set-up a Test match field with a slip and a silly-point in place. Pollard, of course, placed himself at silly-point and took a stunner to help Shakib end his iconic spell on top.

Boundary catches are always tough but when the ball is hit fast and flat, it becomes much more difficult. But when someone like Martin Guptil fields around the ropes, there is always a chance. The Kiwi star pulled off a stunner in CPL 2014 to dismiss Kevin Pietersen in the match between ST Lucia Zouks and Guyana Amazon Warriors at Warner Park.

Navin Stewart bowled a slower bouncer which Pietersen tried to heave towards wide long-on boundary but Martin Guptil stood in between. Guptil leapt up high in the air and grabbed a one-handed screamer to send Pietersen back to the pavilion.

Modern-day cricket is all about innovations, be it with the bat, ball or in the field. But there are a few innovative shots that came from the former cricketers. Tilakarantne Dilshan’s dil-scoop is one of them. The Sri Lankan veteran played it with so ease that it seemed just another copybook shot.

In CPL season 1, he sent Fidel Edwards’ full-pitched delivery flying towards fine-leg boundary with his trademark ‘dil-scoop’ shot. Edwards bowled a delivery in at around 145kmph and all Dilshan did was put his bat in front of his head and Edwards’ pace took it over the boundary rope.

Ricky Ponting was a star with the bat, an impeccable leader and on top of it, an incredible fielder as well. His fielding efforts would often make the crowd go bonkers. In CPL 2013, the former Aussie skipper nailed a direct-hit while fielding at point to send a well-set James Franklin back to the dugout.

Franklin dropped a good-length delivery for a single towards point. But Ponting was quick to grab the ball and with just one stump visible, he sent bails flying. “Just a reminder about his brilliance in the field, only had the one stump to shy at,” shouted Mike Haysman from the commentary box.

In match number five of CPL 2014, batting first Trinidad and Tobago Red Steel posted a below-par total of 118 runs. Succumbing to the pressure of a low-scoring encounter, Guyana Amazon Warriors also lost wickets on regular intervals in response. The match ended in a draw and it was left for super-over to decide the winner of the match.

Guyana made 11 runs in the super-over and to defend it, they handed the ball to Sunil Narine. The mystery spinner did an impossible job: bowled four consecutive dots to dangerous Nicholas Pooran before dismissing him on the fifth ball. He bowled another dot to finish the over and created history. Narine became the first bowler to bowl a MAIDEN super-over– the record which is still intact.