The all-rounders of these two teams have been in phenomenal form with both the bat and the ball throughout the tournament. 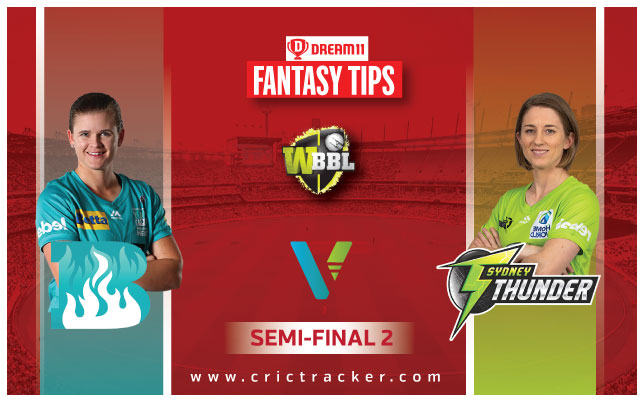 The 2nd Semi-Final of the Women’s Big Bash League (WBBL) 2020 will be played between the Brisbane Heat Women and the Sydney Thunder Women at the North Sydney Oval.

Having fought their way to be one of the top 4 sides in the points table, at the end of the league stages, the Brisbane Heat Women are all set to face the Sydney Thunder Women in the second semi-final. This match would take the winner into the finals, where they will have a shot at winning the tournament. Both these teams did well in the league stage, with one inching ahead of the other by a small margin.

This would give the Brisbane Heat Women a small higher ground over their opponents. But, since these teams won their matches coming into this match by considerable margins, the advantage would be reduced to a really small margin. So, it would be interesting to see which team emerges out on top in this match, as it promises to be a closely contested game of cricket.

The weather in Sydney looks good for an uninterrupted cricket match to be played out. The skies are expected to be mostly sunny, with no chance of rainfall and temperature around the 23 degree Celsius mark.

The pitch at this venue is all set to be a batter friendly pitch, where chasing down totals in the second innings would be an easier task to execute as compared to scoring runs in the first innings. The pacers will be the ones among the bowlers who will be enjoying the most amount of help.

Heather Knight performed well as an all-rounder for your team in this tournament and is placed in some of the highest positions in both the run scorer’s and wicket taker’s leader board. She has taken 9 wickets and has also scored 403 runs in the 14 matches that she has played in.

Grace Harris has also stood up to the occasion whenever needed for her team as an all-rounder for her team. She has scored 240 runs and has managed to pick up 13 wickets at an economy rate of 5.61 runs per over in the 13 matches that she has played in.

Jess Jonassen is another player who has been a great all-round contributor for her team during her team’s campaign in this tournament. Having taken 16 wickets and scored 212 runs in 13 matches, she has come to be one of the most valuable players for your team.

Georgia Redmayne has been in exceptional form with the bat throughout this tournament. She has scored 332 runs in 13 matches for her team at a strike rate of 117.73, all of which came in situations when it was most needed for her team.

Sammy-Jo Johnson is placed at the third position in the wicket taker’s list at the moment, with as many as 18 wickets to her name in 14 matches at a bowling average of 16.72. She will want to guide her team through this match by bowling tight lines and making sure at no time, runs flow easily for the batters.

The all-rounders of these two teams have been in phenomenal form with both the bat and the ball throughout the tournament. So, it would be wise to include the 4 top performing players from that section in your team, even making them the multipliers for your team.

Brisbane Heat Women are expected to win this game.