In the Qualifier 1, Mohammad Amir's six-wicket haul blew away the Royals.

The Bangladesh Premier League is all set to crown a brand-new winner. Khulna Tigers and the Rajshahi Royals will be crossing swords in the Final on Friday night at the Sher-e-Bangla National Stadium in Mirpur. Both sides had similar campaigns in the round-robin stage, winning eight out of 12 matches each. In the ongoing tournament, the Tigers have gotten the better of the Royals twice.

Mushfiqur Rahim’s Tigers, after topping table, thumped the Royals in the Qualifier 1 to book a berth in the final. The Royals, on the other hand, found themselves in a rabbit role in the Qualifier 2 versus Chattogram Challengers. However, Andre Russell’s 22-ball 54 saved the day for them. The Royals have played the final once back in 2016 while the Tigers have never come this far in the T20 league.

The pitch in Mirpur has been a sporting one thus far. Batting has looked a bit tough at times, but it hasn’t stopped teams from piling on runs. The bowlers have extracted a fair bit from the surface. Change of pace has paid dividends to a large extent. The conditions will be hazy with the temperature around the 22 degrees Celsius mark. The humidity will mostly be in the 60s and 70s.

The Tigers have found a power-packed opening pair. Mehidy Hasan Miraz and Najmul Hossain Shanto have given their team positive starts, scoring 288 and 308 runs respectively. Due to their rise, Mushfiqur Rahim and Rilee Rossouw have gotten some breathing space. The duo has 528 runs.

The Royals’ batting seemed to have lost a bit of bite in the last couple of games. Liton Das and Afif Hossain Dhrubo need to find back their momentum. Irfan Sukkur scored in the 40s last time, but looked out of sorts. Veteran Shoaib Malik has 446 runs, but had a torrid time against Challengers.

Mohammad Nawaz may get a promotion after his clean-hitting last time. The Royals’ would be breathing sigh of relief after Andre Russell came back to form with the bat in hand. The Jamaican all-rounder is their joint highest-wicket-taker along with Mohammad Irfan, having picked up 12 wickets. 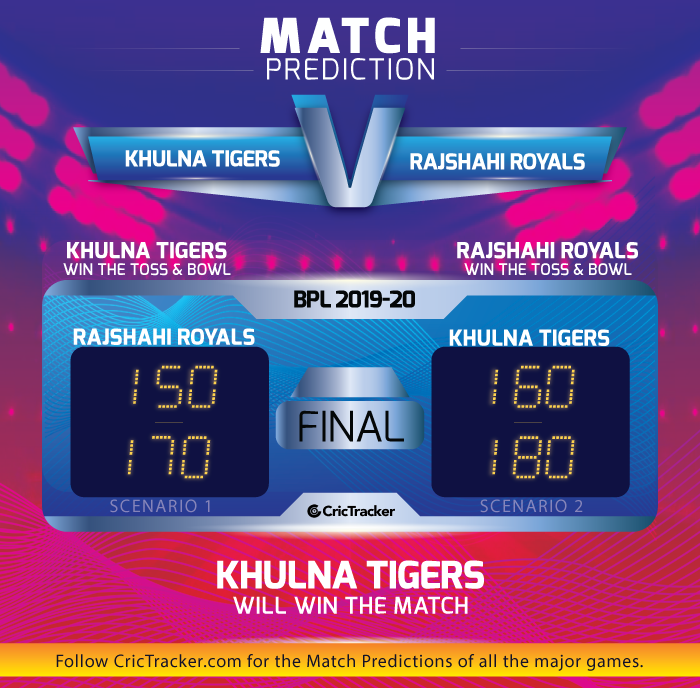