Chattogram Challengers won the toss and elected to field first.

The 10th game of the Bangladesh Premier League (BPL) 2019-20 will be played between Chattogram Challengers and Sylhet Thunder at the Zahur Ahmed Chowdhury Stadium in Chattogram.

This game can be viewed on the Fan Code app in India.

Sylhet Thunder started the tournament in the worst possible start as they lost each of the three matches they played in Dhaka during the first week of the tournament. They lost by five wickets against Chattogram Challengers before an 8-wicket loss and 24-run defeat against Rajshahi Royals and Dhaka Platoon respectively. They will be facing the Challengers once again on Tuesday. The Chattogram team defeated Sylhet and Rangpur Rangers but lost to Khulna Tigers. The Challengers are currently placed at No.3 in the points table.

The first day of BPL 2019/20 in Chattogram is expected to end without any interruption due to rain.

The Chattogram track has been a high-scoring one in the night matches especially during the BPL. In five matches hosted by the venue in the 2018/19 edition, four games recorded totals over 180. The chasing team won two of those showing how good and consistent the pitch here has been throughout 40 overs. A game with 320+ aggregate is expected for the match between Challengers and Thunder on Tuesday.

Chris Gayle is not available for the initial part of the tournament.

Mohammad Sami played his last match in Qatar T10 League on Saturday. He is likely to feature in the match on Tuesday night.

The West Indies trio of Andre Fletcher, Chadwick Walton and Johnson Charles have been in good form with the bat starting from the CPL. Fletcher was the top run-getter during the T10 league while Walton has been pro-active in this format ever since the GT20 Canada. Imrul Kayes struck 61 in the first match against Thunder and scored an unbeaten 44 against the Rangers in the last match. Mosaddek Hossain scored 109 runs across three matches and also claimed two wickets in this tournament. 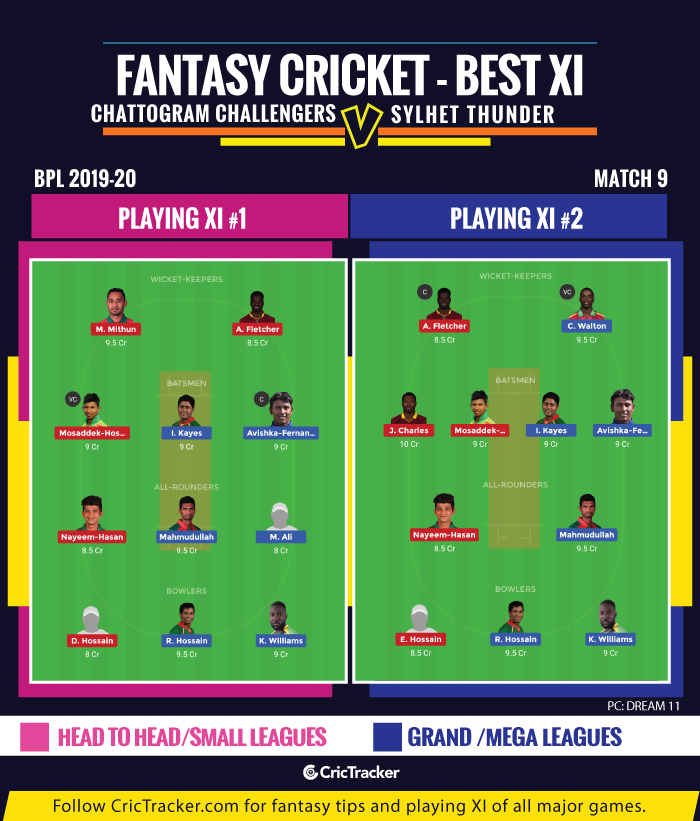 Both Chattogram and Sylhet have made surprising selections with respect to the overseas players. However, we expect both the teams to go with an unchanged playing XI during the match to be played on Tuesday night.

Chattogram Challengers are expected to register their 3rd win of the tournament.