The likes of Shane Watson, Mohammad Naim will lead the batting while all-rounder’s Lewis Gregory and Mohammad Nabi could turn out to be the X-factors.

The 28th game of the Bangladesh Premier League (BPL) 2019-20 will be played between Rajshahi Royals and Rangpur Rangers at the Shere Bangla Stadium in Dhaka.

The Rajshahi Royals have been on a roll thus far. After having won five of their first six fixtures, the Royals have solidified their position in the points table and they’ll be looking to leapfrog table-toppers Chattogram Challengers when they square off against the bottom-ranked Rangpur Rangers on Tuesday.

They come into this game on the back of a 15-run win over Cumilla Warriors after they successfully defended their total of 4-190 thanks to incisive spells from Mohammad Irfan [1-24] and Shoaib Malik [1-19].

Rangpur Rangers, on the other hand, are having a forgettable campaign thus far. After having lost five of their first six games, they are in desperate need of a revival and will hope to start with the rebuilding work when they take on the ever-so formidable Rajshahi Royals on Tuesday.

A sunny day awaits us in Dhaka on Tuesday. According to the weather report, the temperatures are expected to be between 14 and 24 degrees Celsius while the humidity will be around the 69% mark.

Average 1st inning score: 176 [In the last 3 games played at the venue]

Rangpur Rangers– The likes of Shane Watson, Mohammad Naim will lead the batting while all-rounder’s Lewis Gregory and Mohammad Nabi could turn out to be the X-factors. 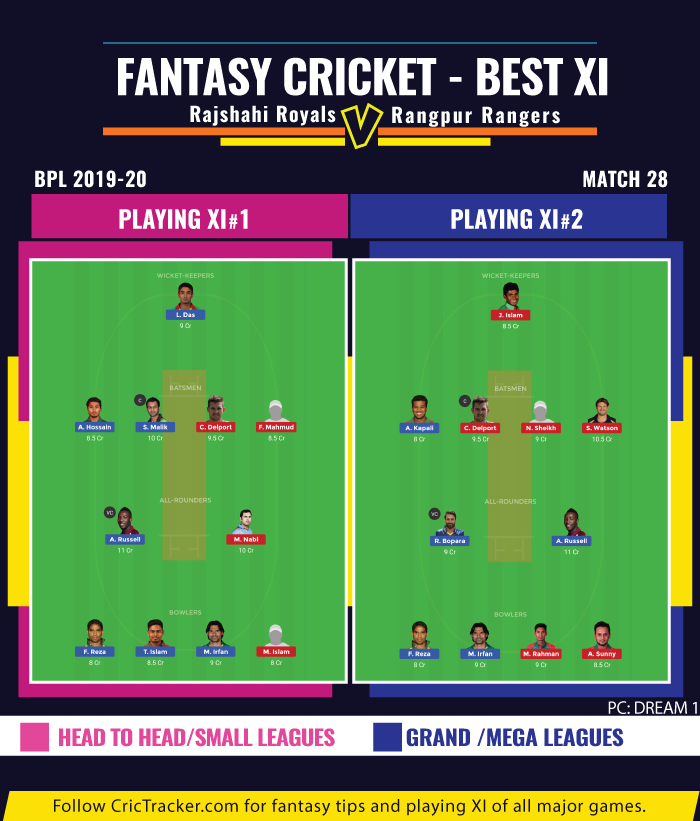 Both sides have got world-class all-rounders like Shoaib Malik, Lewis Gregory, Andre Russell or Mohammad Nabi who can contribute with both bat and ball with aplomb.

Rajshahi Royals are expected to win.