There is a lot of uncertainty around the playing XIs in the BPL. Teams make unexpected changes.

The 32nd match of the Bangladesh Premier League (BPL) 2019-20 will be played between Sylhet Thunder and Rangpur Rangers at the Sylhet International Cricket Stadium in Sylhet.

Both the sides boast of some fierce T20 players and it is baffling to see them struggling this season. Having said that, the possible must-win situation might bring the best out of them and we might get to witness a cracker of a contest on Friday.

It is expected to be a cloudy day on Friday in Sylhet. Rain is likely to play spoilsport in the first game of the day. Though the chances of showers reduce to 10-15% for this game a delayed start can’t be ruled out. However, the temperature is expected to hover around 16-17 Degree Celsius during the match time according to AccuWeather.

The Pitch is expected to help batsmen more as it is considered as a batting paradise. So many big totals were recorded in the last two years on the matches which began after 5 pm.

Mosaddek Hossain didn’t play the previous game. There is no update on his fitness.

Andre Fletcher got hit on the head on Thursday. He might not play this game.

Mohammad Naim contributed well with the bat for Rangpur Rangers and will be an essential pick for any Fantasy side. Mohammed Mithun played a good knock of 62 of 47 deliveries against Rangers on Monday. He has the capability to repeat one such inning again.

Mohammed Nabi has proved his all-round abilities time and again. He can fetch some good points to your Fantasy side. Mustafizur Rahman picked 12 wickets on eight games for the Rangers. He will a bowler to watch out for in this game again. 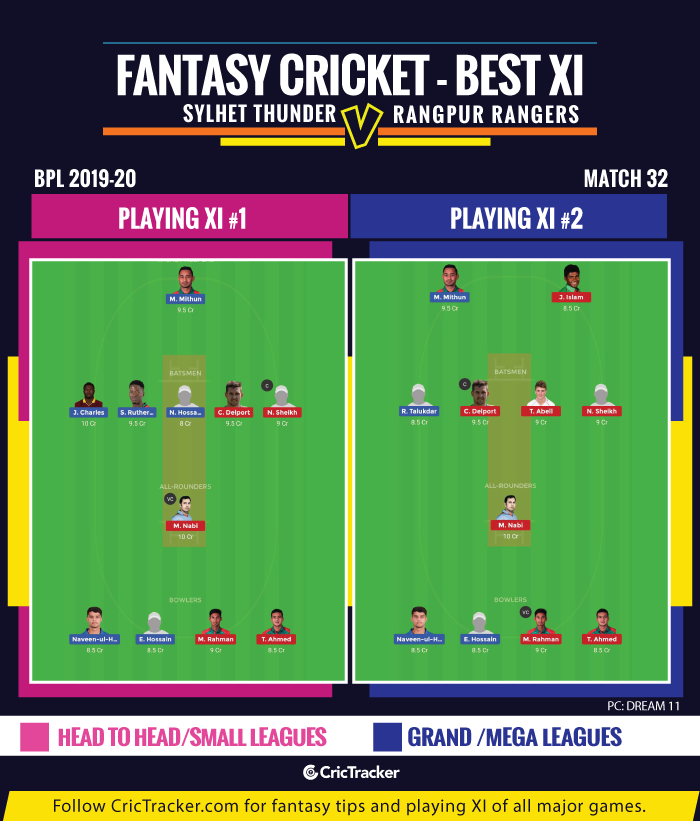 There is a lot of uncertainty around the playing XIs in the BPL. Teams make unexpected changes. It would be better to wait for the playing XIs to be announced before finalising your Fantasy teams. Also, you can visit CricTracker website after toss for the updated team.

If Mosaddek Hossain is playing, then pick him in your team. We haven’t picked now as he didn’t play on Thursday.

Rangpur Rangers are expected to win.