The Rangpur Rangers have found themselves on the verge of getting knocked out of the BPL 2019-20. Having won only three out of their nine matches, Shane Watson and Co are placed sixth in the points table. The Rangers was starting to find a bit of momentum, beating Sylhet Thunder and Rajshahi Royals. But their joy was momentary as Rajshahi Royals beat them by 30 runs in Sylhet.

Their next match is against the Sylhet Thunder in the second of Friday’s doubleheader. Going into the contest, the Rangers can take heart from the fact that they defeated the Thunder by seven wickets in their previous meeting. For the Thunder, they will be playing for pride in their last three round-robin games after their Super Over defeat at the hands of the Cumilla Warriors in Sylhet.

The pitch in Sylhet has been a decent one for batting thus far. But amidst some heavy run-scoring, the spinners have also gotten a fair bit of assistance. In the night-match, dew is likely to play a part. Hitting the right channels may still pay dividends. The clouds will be there during, but with no chances of rain. The temperature will be around 17 degrees Celsius with the humidity in the 90s.

Mosaddek Hossain missed the last match due to an injury. The Thunder has depended heavily on him in the middle order as he has 190 runs. Johnson Charles and Andre Fletcher are in red-hot form, scoring in excess of 200 runs. Fletcher will also don the captain’s hat if Saikat misses out next time.

Mohammad Mithun has contributed as well, having scored 241 runs. The onus will also be on Sherfane Rutherford to make some breakthroughs Ebadot and Naveen-ul-Haq have shouldered a chunk of the responsibility in the bowling department. The rest of the bowling has looked rusty.

Lewis Gregory didn’t play the last encounter due to some reason. If he gets back then the axe may come down on Tom Abell. Gregory has been a fulcrum for the Rangers, having scored 196 runs and picking up 11 wickets. The England all-rounder’s absence was well and truly felt in the last match.

Mustafizur Rahman had an off-day and he will be keen to make amends. Watson needs to find his mojo as he is terribly out of form. Mohammad Naim and Cameron Delport’s role at the top will be of prime importance. Mohammad Nabi has done well with the ball, but has failed with the bat in hand.

The prediction is for Rangpur Rangers to win the match. 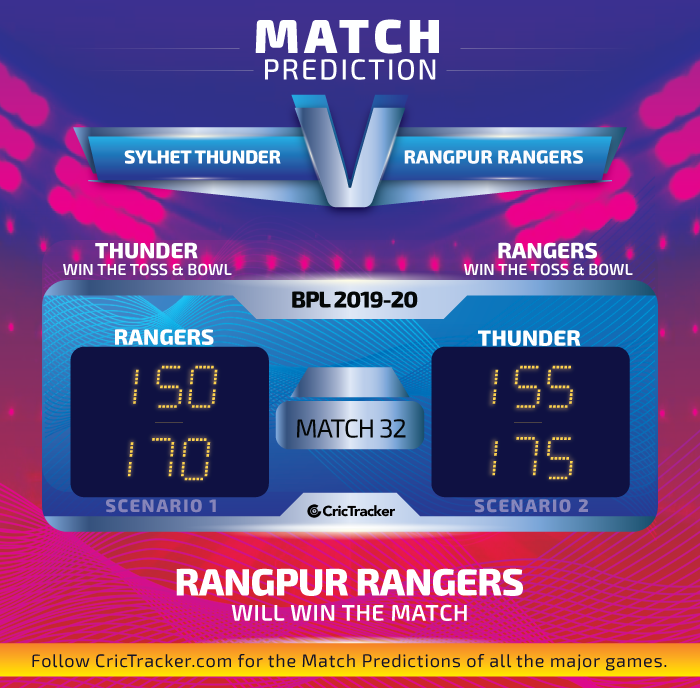