Andre Russell is most likely to make a comeback after missing the last match due to injury.

The Rajshahi Royals went into a bit of a slump after losing to Dhaka Platoon and Rangpur Rangers by pretty handsome margins. But they came back strongly, defeat the Rangers by 30 runs. The victory also helped them take the top spot in the points table. Their upcoming encounter is against the Sylhet Thunder in the second of Saturday’s doubleheader at the Sylhet International Stadium.

The Thunder are the cellar dwellers and bearing in mind their form, the Royals will be going into the game as the favourites. As far as the Thunder are concerned, they are now assured as the lowest-ranked team in the T20 tournament. In their previous game, the Rangpur Rangers beat them by 38 runs. They will now be looking to salvage some pride, performing well in their last two league games.

The pitch in Sylhet has gradually gotten better for batting. Bowlers have found it a little tough, especially in the last couple of matches. Dew also plays a significant part, especially in the second half of the night game. Hence chasing should be a wise option. There are chances of rain throughout the day with overcast conditions. The temperature will mostly be around 18 degrees Celsius.

The Thunder’s batting hasn’t clicked to the extent they would have liked. Barring his century, Andre Fletcher hasn’t been at his best. Johnson Charles didn’t play the last match and it weakened the batting to a great extent. Mohammad Mithun has scored runs, but hasn’t quite delivered in need.

Sherfane Rutherford looked good last time with his maiden T20 fifty. To his dismay, he didn’t get much support from the others. Krishmar Santokie flattered to deceive as well. In the bowling department, Ebadot Hossain has been their standout performer, picking 13 wickets at 7.11.

Andre Russell didn’t play the last game due to an injury. But Ravi Bopara updated that the Jamaican has made good recovery. If Dre-Russ plays then Pakistan’s Mohammad Nawaz may have to sit out. Liton Das and Afif Hossain Dhrubo have been prolific run-scorers with 255 and 260 runs respectively.

Bopara has the highest batting average of 64 in the Royals’ lineup and that shows how fluent he has been. He has also delivered with the ball, picking up eight wickets. Malik has floundered a little of late, but is expected to get his rhythm back. The bowlers have mostly chipped in with useful spells.

The prediction is for Rajshahi Royals to win the match. 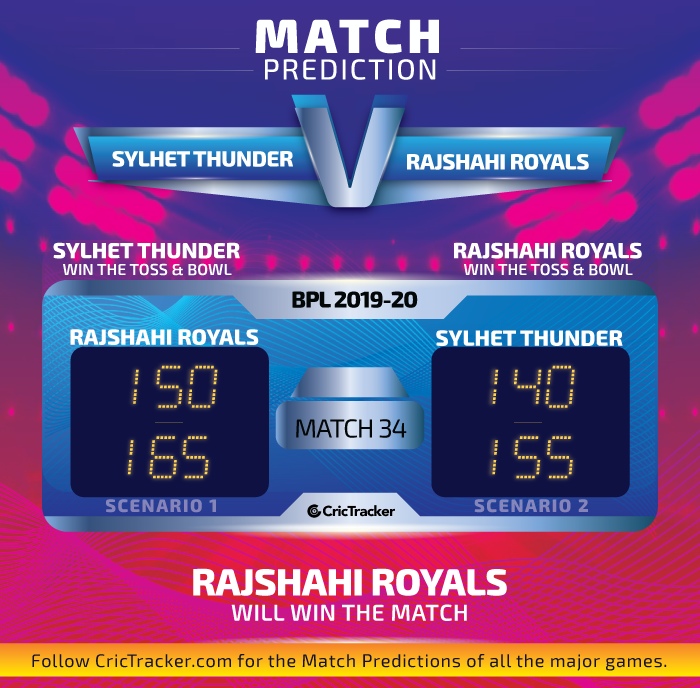