The Warriors and Tigers seem to be competing for the fourth spot in the playoffs.

The Cumilla Warriors beat the Sylhet Thunder by five wickets in Mirpur and are placed fifth in the points table of the Bangabandhu BPL. Dawid Malan and Co are locked with Khulna Tigers on 10 points. But Mushfiqur Rahim’s Tigers have played one game less. In fact, the Warriors and Tigers will be locking horns in their next two games and that could decide the likely fourth team in the playoffs.

The Warriors lost four matches in a row, but have made a strong comeback. They beat Chattogram Challengers and then got the better of the Thunders a couple of times. The Warriors have a net run rate of +0.233, a bit less than that of the Tigers, who are fourth on the table. The Tigers, on the other hand, lost their previous two games and will be looking to get back to winning ways at the earliest.

The pitch at the Sher-e-Bangla National Stadium has been an excellent one for batting. But bowlers haven’t returned completely empty-handed. Spinners have extracted a significant amount of purchase from the surface. Batting second should be the way forward. The conditions will mostly be cloudy throughout the duration of the match. The temperature will be around 23 degrees Celsius.

The Warriors’ batting has been led by Dawid Malan, who has 435 runs at an average of 62.14. He missed one game due to personal circumstances, but made a brilliant comeback. The southpaw has gotten good support from Soumya Sarkar, who has scored 299 runs with a couple of half-centuries.

The rest of the batting has to step up at some time. In bowling, Mujeeb Ur Rahman has looked unplayable at times. The young tweaker has 14 wickets at an economy of five. Al-Amin Hossain and Soumya Sarkar have been a tad on the expensive side, but has a combined tally of 23 wickets.

The Tigers have depended heavily on Rilee Rossouw and Mushfiqur Rahim in the batting department. Both has a combined tally of 649 runs with six half-centuries. The rest of the batting has looked out of sorts. Khulna’s experiments with their opening partners have gone haywire as well.

Robbie Frylinck has added some useful runs lower down the order. Frylinck also has been one of their key wicket-takers with 10 wickets. Shahidul Islam didn’t play the last game, but is their leading wicket-taker. Shafiul has an economy of 8.70 though the fast bowler has seven wickets in his kitty. 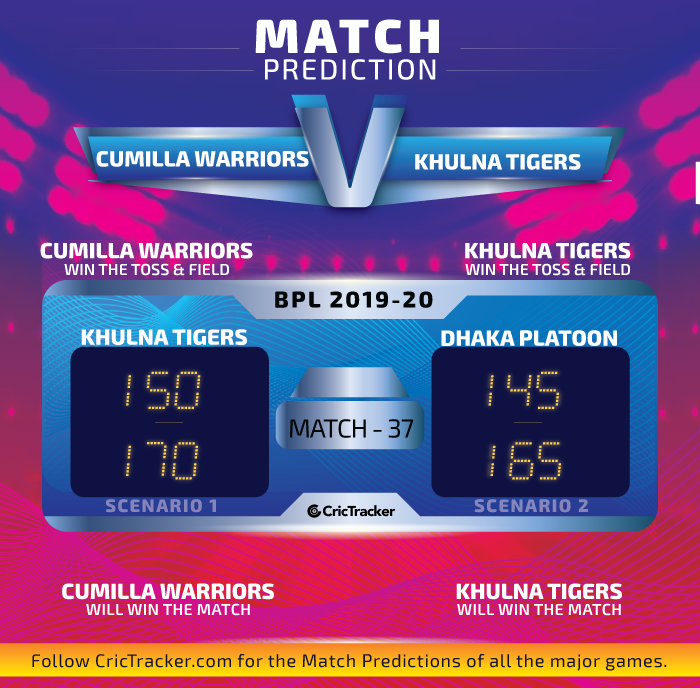