Ryan Burl may not have had a great last game but he could well be the X-Factor against Khulna.

The fourth match of the 2019-20 Bangladesh Premier League will be played between Chattogram Challengers and Khulna Tigers at the Shere Bangla National Stadium in Dhaka.

The caravan of the 2019-20 edition of the Bangladesh Premier League rolls on and the second game of Thursday’s double-header will see Chattogram Challengers square off against Khulna Tigers in Dhaka.

The Challengers got off to a brilliant start to their 2019-20 campaign courtesy a comprehensive and five-wicket after they chased down 163, set by Sylhet Thunder, and will to build on that victory when they take on Mushfiqur Rahim’s Khulna Tigers. Chasing 163, the Challengers lost their top-order courtsey Nazmul Islam (2-23) and Krishmar Stankie (1-34), and were at one stage, reeling at 4-64 after 8.5 overs.

However, an 86-run-stand between Imrul Kayes (61 off 38 balls) and Chadwick Walton (49* off 30 balls) ensured the run-chase was not only resurrected but also ensured they took Chattogram past the finishing line.

They’ll now face Mushfiqur Rahim-led Khulna Tigers, who apart from the skipper himself boast of power-hitters like Rahmanullah Gurbaz, Rillie Rossouw while the spin-bowling department boasts of an able duo of Mehidy Hasan and Aminul Islam Biplob, ensuring that a mouth-watering encounter is up for grabs.

There is no chance that rain will have any effect on the game. According to the weather report, it is expected to be a bright and sunny day in Dhaka with temperatures ranging between 18-27 degrees and humidity at around 57%.

In the first two games played at the Sher-e-Bangla stadium, the pitch has proved to be a good one for the batsmen. However, with back-to-back encounters played at the venue, we could see the slow bowlers come into play.

Average first innings score:  163 (In the first completed game at the venue this season)

Chattogram Challengers- The likes of Avishka Fernando (33), Imrul Kayes (61) and Chadwick Walton (49*) were the lynchings around which the Tiger’ batting revolved in the first game, and much of the same should be the case against Khulna Tigers.

As far as the bowling is concerned, Rubel Hussain (2-27),  Nasum Ahmed (1-34) and Rayad Emrit (1-38) will be the key. Ryan Burl may not have had a great last game but he could well be the X-Factor against Khulna.

Khulna Tigers- As far as Khulna Tigers is concerned, the batting should revolve around skipper Mushfiqur Rahim, Rahmanullah Gurbaz and Rille Rossouw, while the likes of Aminul Islam, Mehidy Hasan and Mohammad Amir will lead the bowling unit. 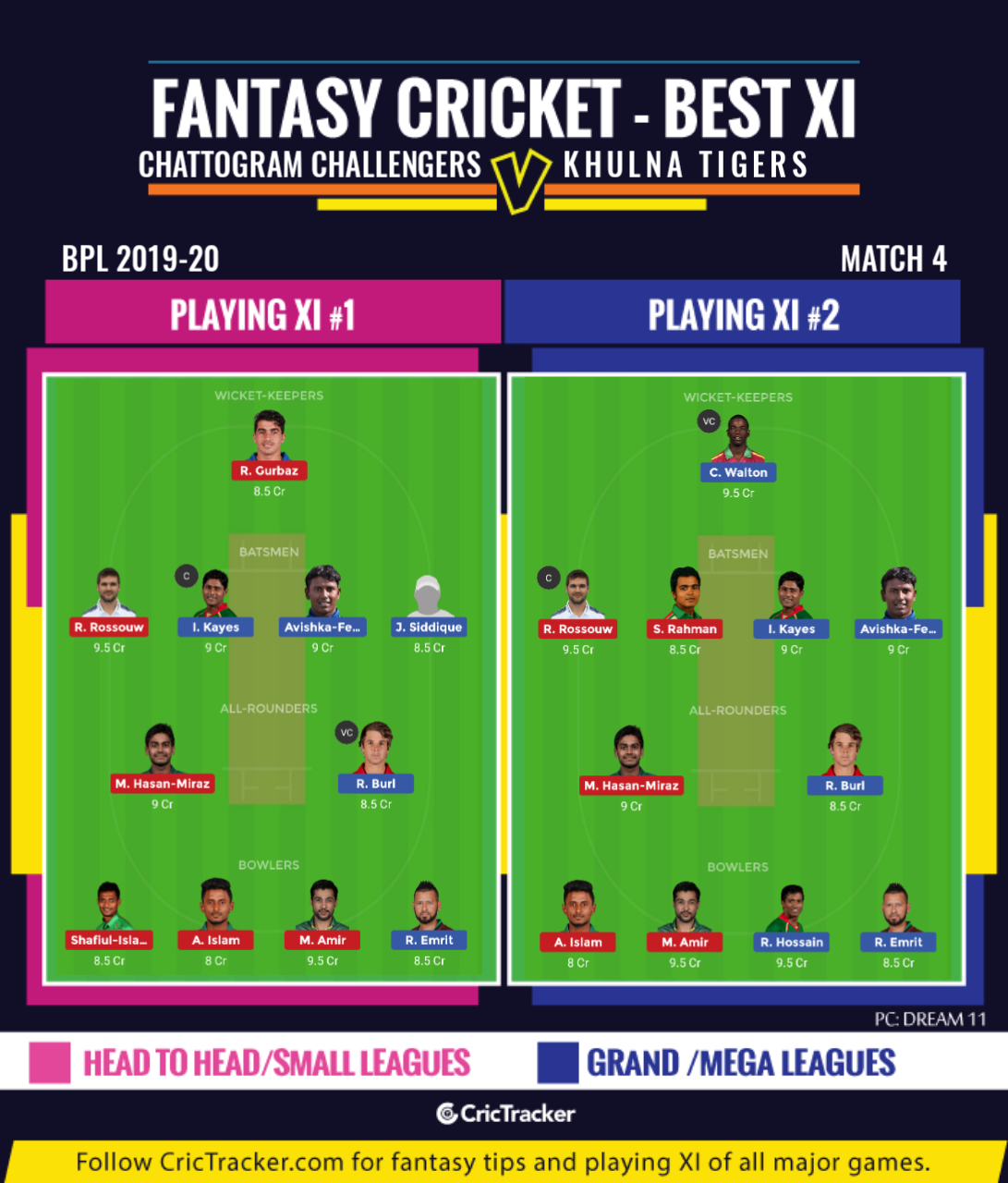 Both sides have a plethora of match-winning batsmen on their side and opting for the likes of Gurbaz, Kayes, Walton or Mushfiqur Rahim could turn out to be a great punt. All-rounder Ryan Burl can be a great wild card pick.

Chattogram Challengers are expected to win.