The Royals need a win to have any chance of playing the Qualifier 1.

Chattogram Challengers have already made their way through to the playoffs. But the team, led by Mahmudullah, is yet to confirm their spot in the top two. They beat Khulna Tigers and Rajshahi Royals in their last two matches and are sitting pretty with 16 points from 11 matches. Their next encounter is against Andre Russell’s Royals itself in the first of Saturday’s doubleheader in Mirpur.

A victory would finalise their spot in the Qualifier 1. The Royals, on the other hand, have 14 points from 11 matches. After winning five of their first six matches, they have tended to stutter. In order to have any chance of finishing in the top two, the Royals have to turn the tables on the Challengers. A loss will mean that they have to win three matches in a row for getting their hands on the trophy.

The pitch at the Sher-e-Bangla National Stadium has slowed down a tad in recent times. The spinners have got a fair amount of assistance from the surface. Despite that, runs have flowed at a fair clip. The conditions during match time will be a tad hazy. The temperature will be around the 23 degrees Celsius mark with the humidity mostly in the 40s. The wind will be blowing at 13 kmph.

The Challengers’ batting has been bolstered with Chris Gayle’s inclusion. The Jamaican was severe on young spinner Afif in the previous game. Lendl Simmons and Imrul Kayes have shown enough consistency at the top. The return of skipper Mahmudullah has also strengthened their batting unit.

The likes of Nurul Hasan and Ziaur Rahman can wield the willow to good effect as well. In the bowling department, pacers Mehedi Hasan Rana and Rubel Hossain have been outstanding. The duo has a combined tally of 33 wickets. The rest of the bowlers have also chipped in with bits and pieces.

The Royals’ batting has been their major strength. Afif Hossain and Liton Das have in excess of 300 runs and have given their team fast starts. The middle-order has looked a tad vulnerable off late. It’s not short of firepower though with the likes of Andre Russell, Shoaib Malik and Bopara in the ranks.

Russell is also their leading wicket-taker with 11 scalps. Farhad Reza also found his rhythm with the ball. The Royals have persisted with their tactic of using at least eight bowlers in an innings. Pacer Mohammad Irfan has bowled the most number of overs (31) for them, picking seven wickets. 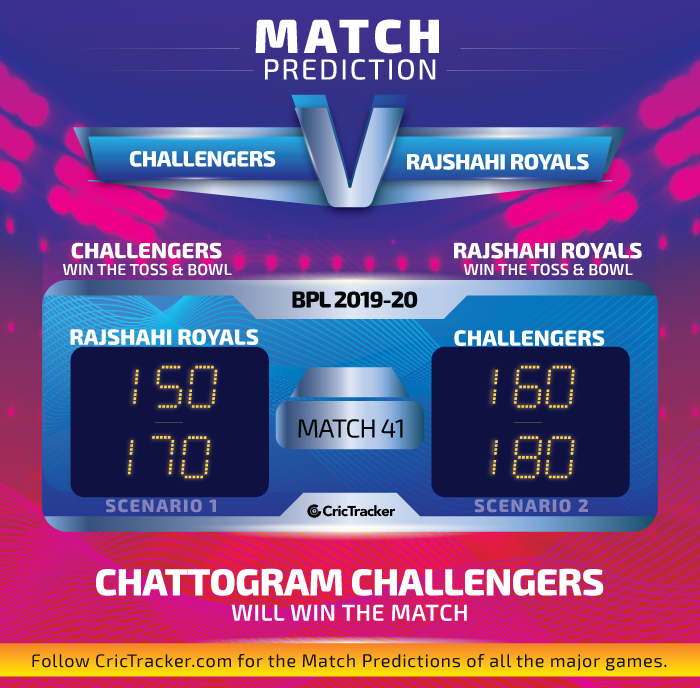