Earlier, the Victorians beat the Kings by five wickets at the same venue.

Comilla Victorians haven’t been affected much by Steve Smith and Shoaib Malik’s departure as they are placed third on the points table in this edition’s Bangladesh Premier League (BPL). The team, captained by Imrul Kayes, thumped Khulna Titans the other night in Sylhet and would be looking to replicate their performance against the Rajshahi Kings at the renowned Sher-E-Bangla National Stadium in Dhaka.

The Kings, on the contrary, are in a bit of a tangle and need a victory to get themselves up the table. Mehidy Hasan’s men also need to work on improving their Net Run Rate (-0.750). A few days ago, Rajshahi met Comilla in Dhaka only to lose by five wickets. Nevertheless, the 20-run victory against Dhaka Dynamites, the table toppers, would keep them in a positive frame of mind ahead of their seventh match.

Dhaka has hosted 14 matches thus far in this BPL and in the afternoon games, the teams, batting first has had the advantage. The pitch has gotten a little better with a few high scores, but defending a target looks like the way forward for the teams for the time being. The slower bowlers are likely to have their say and the fact that dew won’t play a part makes them effective prospects on the slow and low decks.

Tamim Iqbal and wicketkeeper Anamul Haque are the opening batsman with captain Kayes at number three. Shamsur Rahman comes in at number four. With the likes of Thisara Perera and Shahid Afridi in the ranks, there’s no shortage of firepower. The duo will also need to perform with the leather in hand. The onus will also be on Mohammad Saifuddin, Wahab Riaz and off-spinner Mahedi Hasan.

Skipper Mehidy will continue to open along with Shahriar Nafees. Marshall Ayub will want to carry forward his impressive run of form. The experienced Ryan ten Doeschate needs to step up and deliver. The batting has depth with Isuru Udana, also a vital cog with the ball, lower down the order. Left-arm spinner Arafat Sunny, Mustafizur Rahman and Kamrul Islam Rabbi are the other bowlers in the lineup.

The prediction is for Comilla Victorians to win the match. 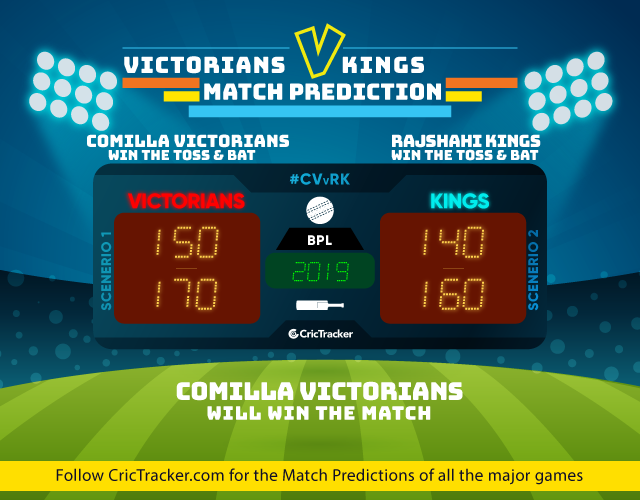