Both teams lost their previous matches against Chittagong and Rajshahi respectively.

The Dhaka Dynamites started this edition’s Bangladesh Premier League (BPL) with four victories on the trot. But the team, captained by Shakib Al Hasan, has managed to lose two out of their last three matches. Their latest defeat came against Chittagong Vikings at the Sher-E-Bangla National Stadium when Robbie Frylinck scored 16 runs in the last over. They are next scheduled to play Comilla Victorians.

Having won five matches, Dhaka are well on their way of progressing to the playoffs, but they would be wary of not losing the winning-momentum. The Victorians lost their previous match against Rajshahi Kings, yet are handsomely placed in the third position of the points table. However, another loss could well put the skids under them as the teams below them are well and truly breathing down their neck.

The pitch is expected to be good for batting and stroke-making won’t be that much difficult. But yesterday’s match didn’t quite produce as many runs as expected. Nevertheless, the wickets have churned out surprises and a high-scoring affair can’t be ruled out completely. Teams may field first and defend a target bearing mind the weather conditions when dew takes over.

The Dynamites may replace Mohor Sheikh with Asif Hasan. Talukdar and Sunil Narine remain to be the opening batsmen with Heino Kuhn at number three. The onus would be on captain Shakib in the middle order followed by Andre Russell. Darwish Rasooli may make way for Kieron Pollard. Shuvagata Hom adds depth to the batting. Fast bowler Rubel Hossain will also need to be at his very best.

The Victorians may think about replacing Mahedi Hasan with Abu Hider Rony. Tamim and Anamul continue to open the batting with Shamsur Rahman at number three. The likes of Ziaur Rahman and Imrul Kayes are slotted to bat next. Liam Dawson and Thisara Perera and Shahid Afridi are the all-rounders and need to perform. Wahab Riaz and Mohammad Saifuddin are the genuine fast bowlers.

The prediction is for Dhaka Dynamites to come out trumps and strengthen their position at the top of the table. 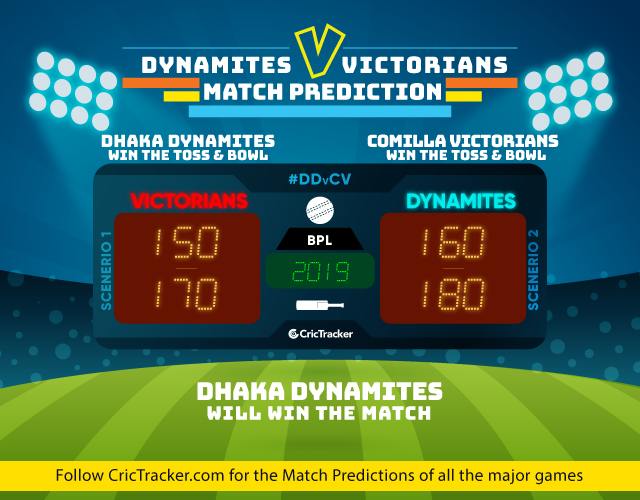