Who will be the best option as captain? Rilee Rossouw, Chris Gayle, AB de Villiers or Mushfiqur Rahim?

The Bangladesh Premier League 2019 moves on to Chattogram with the expectations of high-scoring games given how the recent matches fared. The tournament has witnessed some brilliant batting performances ever since the Sylhet-leg matches. The home team Chittagong Vikings will be in the action during the second game of the day when they face the Rangpur Riders. The Vikings are on the top of the table with six wins from seven matches they played.

Chittagong won all the five matches they played since their five-run defeat to the Sylhet Sixers early in the tournament. The defending champions Rangpur Riders have been on the losing side of some close matches. They won four of the eight games they played thus far. They have won both their matches since the inclusion of AB de Villiers as their top four in the batting-order reads: Chris Gayle, Alex Hales, De Villiers and Rilee Rossouw.

The 30th match of the Bangladesh Premier League (BPL) 2019 will be played between Chittagong Vikings and Rangpur Riders at the Zahur Ahmed Chowdhury Stadium in Chattogram.

High scoring games were witnessed at this venue during the last season of the BPL. The night matches even had 200+ totals and same might repeat in this season as well. Scores of 170+ have become common in the BPL after starting off with a couple of low scoring matches.

One of the main reasons for Chittagong Vikings’ winning run is Mushfiqur Rahim. The captain of the Vikings team has three fifties from last four matches. Out of the seven matches this season, Rahim cross 20 in six matches. He got out for just five runs during his team’s only defeat in this season.

Going by the form in this tournament, Rilee Rossow and Mushfiqur will be perfect as captain and vice-captain. Alex Hales has come into the form lately and so did Cameron Delport with the ball as well. The duo can be the other solution for captain and vice-captain as they will be opening the innings as well. AB de Villiers, Mohammad Shahzad and Chris Gayle can be alternative picks as multipliers. 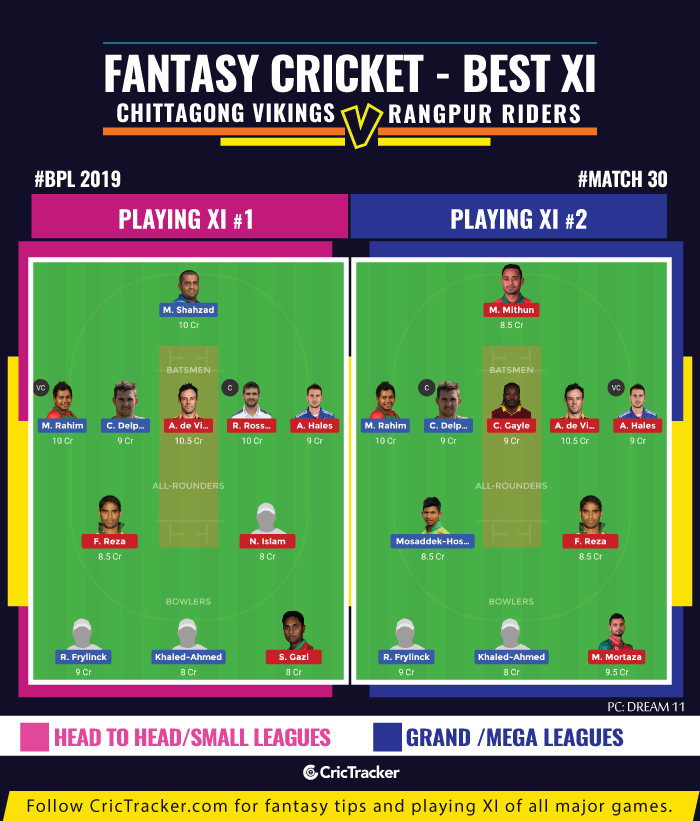 The top four of both the teams are expected to score a lot of runs in this game. However, there is a maximum possibility of including only six players that too by spending a lot of credits. Rossouw and Mushfiqur have been the most consistent players among the eight. But there is a possibility of both getting fewer balls to face like it happen with Rilee during their last game against Khulna Titans.

Chittagong Vikings are expected to continue their winning-run if their bowlers can strong the Rangpur Riders’ formidable top four.