Who will be the top performer for the Sylhet Sixers and Rajshahi Kings?

Rajshahi Kings and Sylhet Sixers will face off in the last match of the season at Chattogram and it is a crucial game for them both. The Sixers are back into the frame for a qualifier spot after consecutive wins. They have four wins from the ten matches they played while Rajshahi has five wins from 12 matches. Rajshahi are not assured of a spot in the qualifiers as two wins from two games will make them finish with 14 points only.

Their NRR is not good enough and will force them to rely on results of other games. On the other hand, Sylhet is in a comparatively better position as they need to win their remaining four games to finish in the top four. The Sylhet team has a well-oiled top-order that has been performing well recently and will boost the team’s morale. Sixers are expected to outclass Rajshahi with their batting firepower in this crucial fixture.

The 38th match of the Bangladesh Premier League (BPL) 2019 will be played between Sylhet Sixers and Rajshahi Kings at the Zahur Ahmed Chowdhury Stadium in Chattogram.

After three consecutive high-scoring matches in Chattogram, the new pitch used on the 4th day troubled the batsmen. On a track with a fringe of lively grass, the side batting first couldn’t post big totals.

Isuru Udana of Rajshahi was part of the unofficial ODI series against Ireland A that concluded on Tuesday.

Wayne Parnell is available for the selection having replaced Imran Tahir. Sandeep Lamichhane is a part of the Nepal team that shall face UAE.

Taskin Ahmed is having a great BPL with the ball which could bring him back into the national side. The Bangladesh pacer bagged 20 wickets from ten matches this season. Taskin claimed ten wickets in the previous four games with at least two in each game.

The likes of Sabbir Rahman, Liton Das and Laurie Evans have to be the first preferred options as captain or vice-captain. Ryan ten Doeschate, Jason Charles and Jason Roy can also be considered for these roles. Mehidy Hasan Miraz, Soumya Sarkar and Nicholas Pooran will be risky names for captain and vice-captain given their scarce success. 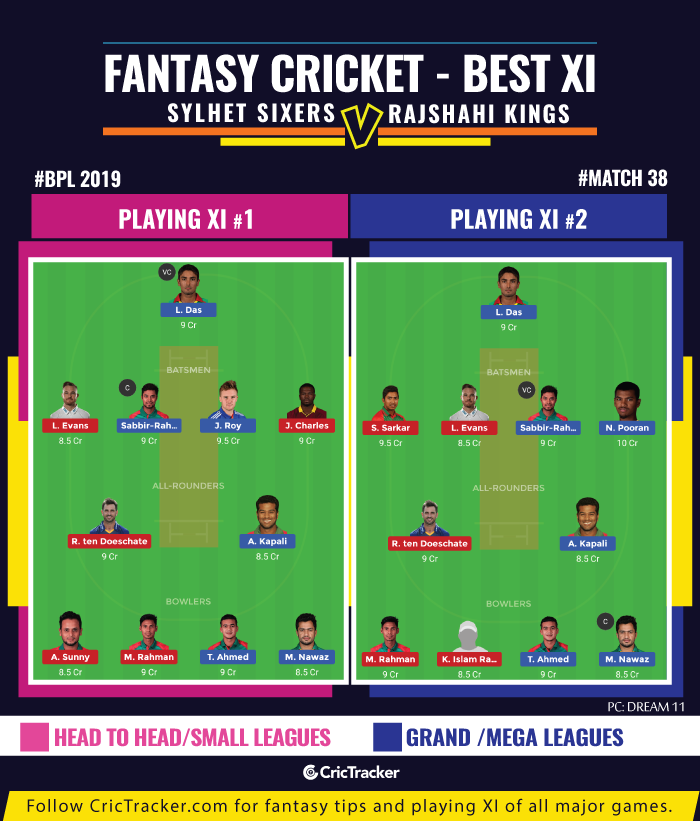 In the recent matches, Nicholas Pooran and Mehidy Hasan Miraz haven’t made a great impact. Pooran didn’t get a chance due to the top-order’s success while the high scoring matches didn’t help Mehidy’s case as he is not batting in the top four. The two players can be excluded depending on the credits available for others.

Sylhet Sixers are expected to defeat Rajshahi Kings and register their 5th win of the season given their recent form.