Two star-studded teams will make it tough to pick your XI and chose the captain and vc.

The Dhaka Dynamites are heading the Kings XI Punjab way in the sixth edition of the BPL. After dominating the first half of the league, KXIP‘s graph went downslope in the second half after consecutive losses in IPL 2018. The situation with the Dynamites is very similar. In the first six games, they won five and lost just one. However, the team lost four consecutive games that it played since then.

From the first position on the points table, they’ve now slumped to the fifth slot. Dhaka will surely have to win at least one of their remaining two games to find a place in the playoffs. They will be facing the Comilla Victorians in the first of these two encounters. Comilla recorded a hat-trick of wins in their last three games and will want to seal one of the top two spots. It should be a great contest to watch.

The 39th match of the Bangladesh Premier League (BPL) 2019 will be played between Dhaka Dynamites and Comilla Victorians at Sher-e-Bangla National Stadium in Mirpur, Dhaka.

Cricket returns to Dhaka with this game after a short gap. The surface here is a good one to bat on and the average day game scores are quite high.

Evin Lewis returned with a century but he did not bat in the game against Chittagong.

Shakib Al Hasan, Andre Russell and Tamim Iqbal are the players whom you should look at as your first-choice captains. As the vice-captain, you can pick one between Thisara Perera and Sunil Narine. Anamul Haque, Rony Talukdar and Evin Lewis are the other options that you can consider. 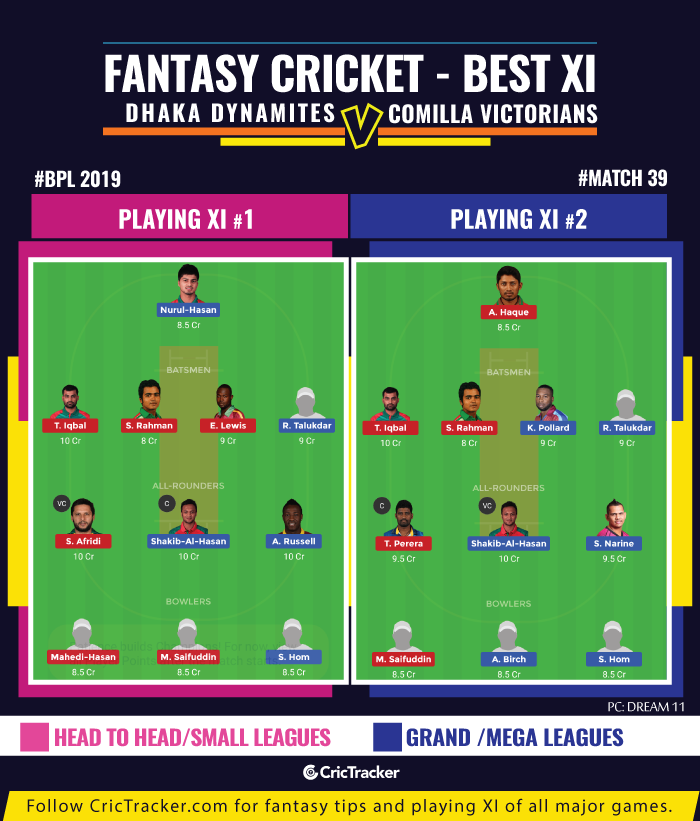 With the likes of Afridi, Shakib, Perera, Narine and Russell, there are quite a few options available in the all-rounder category. However, Shakib is the best option and is a must in your team. Afridi and Russell are safe options. Narine isn’t is the best of forms while Perera has been underused by Comilla in the tournament.

The Dhaka Dynamites are predicted to win as they are playing in their home conditions.