This is Dhaka’s final opportunity to make it to the knock-out stage of the tournament.

Match number 42 is the final league match of BPL 2019. By virtue of just two wins, Khulna Titans will finish at the bottom of the pile regardless of the outcome of this game – a rather forgettable campaign. As for Dhaka Dynamites, their excruciating 1run loss to Comilla will give them a sleepless night. They are now in the midst of a two-way battle for the fourth spot on the table.

Rajshahi Kings are through with all their league matches and will now watch with bated breath as Dhaka play Khula. Dhaka’s net-run-rate is in the positive while Rajshahi, despite being two points ahead, have a negative net-run-rate. The equation for Dhaka, therefore, is fairly simple – win this game and sneak into the eliminator ahead of Rajshahi Kings.

Dhaka’s middle-order batting is robust. They have Shakib, Pollard, Russell, Talukdar and Nurul Hasan to guide them through the late overs. The concern, however, is the indifferent form of Sunil Narine with the bat. That said, the West Indian looks set to open the batting with Mizanur Rahman.

Dhaka’s bowling unit will be propelled by Rubel Hossain and Shuvagata Hom.

The last time Khulna lined up against Dhaka, they succumbed by 105 runs. What’s more, they come into this game on the back of an 80-run defeat to Comilla in their most recent fixture. These factors won’t do their confidence any good. Add to this the fact that Khulna will be playing in front of Dhaka’s home crowd and you have a miserable situation building up in the Khulna camp. 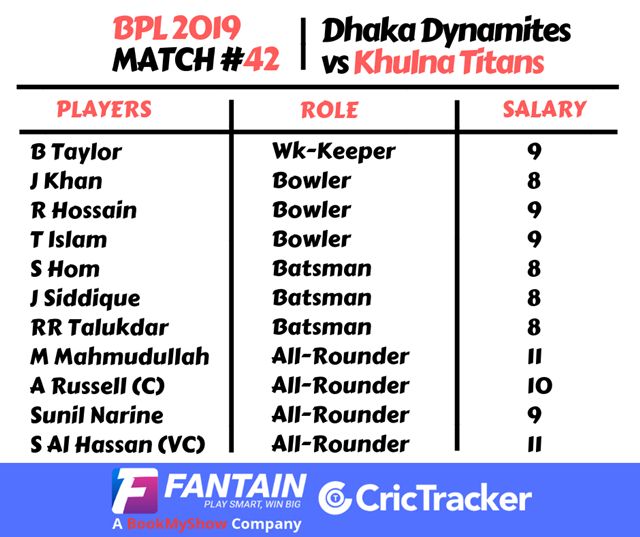