The Sylhet Sixers are expected to open their account by handing the Chittagong Vikings their first defeat.

Chittagong Vikings, who defeated the defending champions Rangpur Riders in the opening game of the season, will be in the action after three days. The Mushfiqur Rahim-led side exploited the conditions to run through the Rangpur’s batting lineup. Once again, they will be hoping to do the same with the ball and put on a much better performance with the bat. The Vikings will be up against the Sylhet Sixers in their second game of the season on Wednesday.

The Sylhet franchise didn’t have the best of starts to the campaigns as they lost a close game against the Comilla Victorians on Sunday. The David Warner-led team didn’t put on a great effort with the bat in their first match. A late blitz from Nicholas Pooran played a crucial part in taking the Sixers to 127/8 in 20 overs. Their bowlers put on an impressive effort to defend the low score but in vain with veteran Shahid Afridi finishing off with a few massive hits in the end.

The 7th match of the Bangladesh Premier League (BPL) 2019 will be played between Sylhet Sixers and Chittagong Vikings at the Sher-E-Bangla National Stadium in Mirpur, Dhaka.

The tracks in the afternoon matches look like getting better as Dhaka Dynamites nearly made 200 on Tuesday and were aided by the firepower in their batting order. The teams might not look to bat first unless they are confident of making big totals.

Nicholas Pooran has been in the limelight thanks to a breezy fifty against India in the T20I series followed by brilliant performances with the Northern Warriors in the T10 League. The keeper-batsman’s dashing exploits are helping him to succeed in the shorter formats of the game.

Nicholas Pooran has to be among the multiplier roles while Liton Das has to be considered given some of his recent knocks against big the nations. Robbie Frylinck can be a worthy pick as multiplier given his all-round ability. 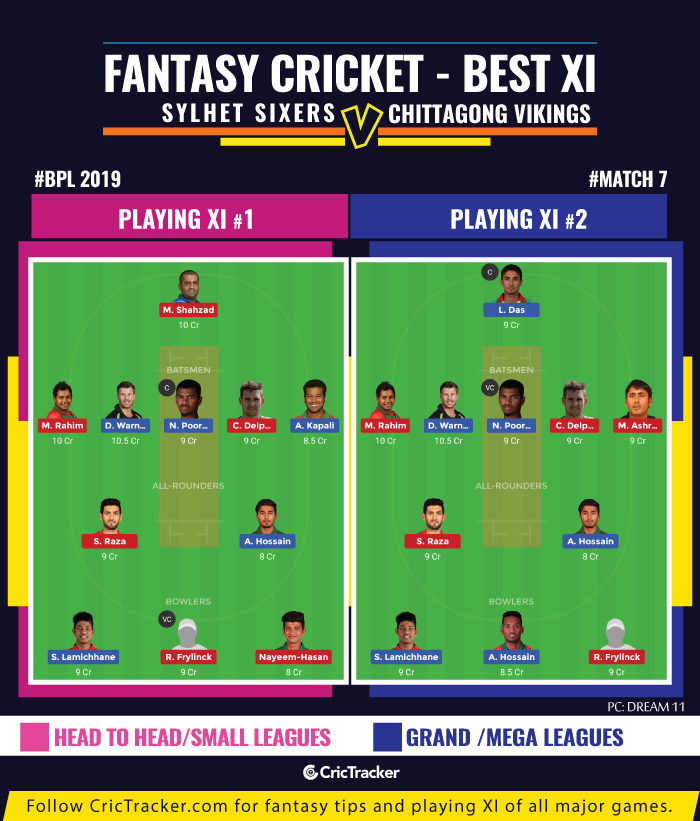 A gamble has to be made between Mohammad Shahzad and Liton Das in the keepers’ category. Shahzad, the overseas player, had a decent start to the tournament while the local boy Litton is expected to have a big season.

The Sylhet Sixers are expected to open their account by handing the Chittagong Vikings their first defeat.