The Dhaka pitch is getting better as the tournament progresses.

The Khulna Titans and Rajshahi Kings, two teams languishing down at the bottom of the points table, will face-off each other in the eighth game of the BPL. The Titans can extremely close in their first encounter against the Rangpur Riders. But, they ended up losing the game by a whisker as they fell 8 runs short. It will be back-to-back games for them as they are scheduled to play the Dhaka Dynamites on Tuesday.

With a few of the international cricketers still unavailable, the Titans do not look to be the strongest of sides on paper. The bowling attack looks slightly fragile while the batting is okayish. The Rajshahi Kings, contrarily, have got a good three-day break. Their players will come out fresh and the management would’ve worked around with the batsmen who failed miserably in the last game.

The Dhaka pitch is getting better as the tournament progresses. The batsmen have possibly understood the behaviour of the track and are doing much better. It is important to strike early in the innings when the ball is still new. As far as the weather is concerned, it is pleasant enough. The humidity, though, goes up as the night progresses and the dew factor will come into play which could speed up the wicket.

The Khulna Titans could go with the same XI from their previous match. Paul Stirling at the top and Mahmudullah in the middle-order will have huge roles to fulfil with the bat in hand. It would be a toss-up between Carlos Brathwaite and David Wiese depending on the workload and performances. The bowlers will have to step up their game and hit better areas.

The Rajshahi Kings have got a few decisions to make regarding their overseas players. They might be looking at Ryan ten Doeschate as an option to replace Christiaan Jonker. Doeschate has been in good form of late and is capable of providing a few overs as well. The other call they’ll have to take is between Qais Ahmed and Isuru Udana. Udana is often amongst the wickets even though he goes for a few runs. He might complement Mustafizur well.

The prediction is that the Rajshahi Kings will win the match 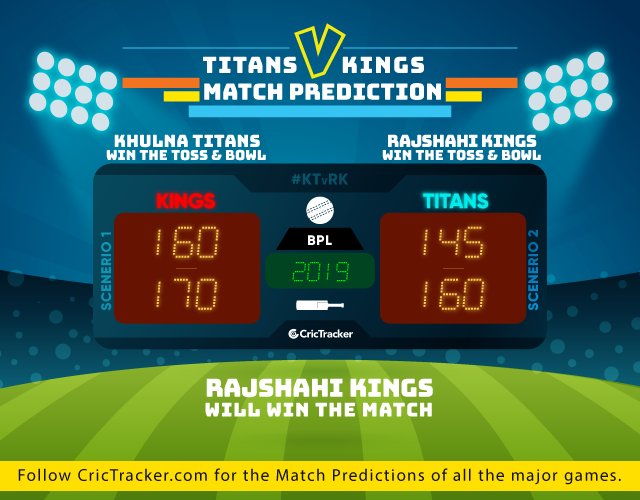