Ben Dunk had the best strike rate among the SKN batsmen where he struck a breezy 21-ball 34 while batting at No.4. 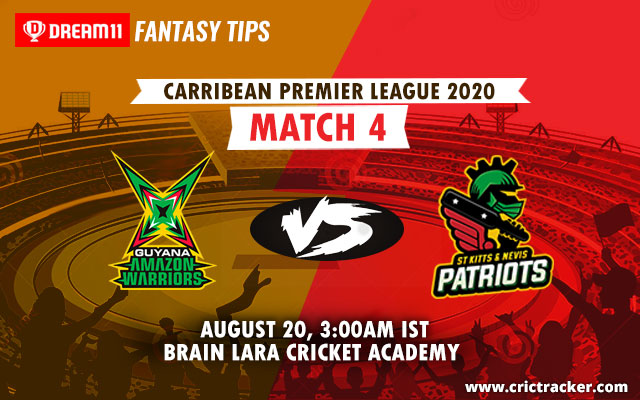 The 4th game of the Caribbean Premier League (CPL) 2020 will be played between Guyana Amazon Warriors and St Kitts & Nevis Patriots at the Brian Lara Stadium in Tarouba, Trinidad.

The Guyana Amazon Warriors, runners up of the 2019 Caribbean Premier League (CPL), didn’t get off to greatest of starts. They suffered a 4-wicket defeat in the hands of Trinbago Knight Riders during the tournament opener. An unbeaten 44-ball 63 from Shimron Hetmyer did saw Guyana post 144/5 in the restricted 17 overs which wasn’t enough in the end. They will now take on St Kitts & Nevis Patriots on Wednesday evening who also succumbed to a defeat on tournament’s opening day.

There could be some showers at the Brian Lara Stadium in the morning but no rain is expected during the evening match.

The Brian Lara Stadium didn’t particularly provide help to bowlers but the slowness didn’t allow the batsmen to go for big shots freely. There was a hint of double paced nature with some balls stopping when pitched. Another over 170 can be a winning total for the teams batting first.

Shimron Hetmyer began the tournament with an unbeaten 63 off 44 balls that included two fours and two sixes.

Imran Tahir conceded 40 runs but returned with two wickets on Tuesday. He has picked up 34 wickets across 22 CPL matches thus far.

Alongside opening the bowling, Sohail Tanvir could be handy as a finisher. He claimed two wickets and scored 16 runs on Tuesday.

Ben Dunk had the best strike rate among the SKN batsmen where he struck a breezy 21-ball 34 while batting at No.4.

Though both the teams suffered defeats in their respective first matches, we might not see any changes going into the second match. Guyana’s playing XI on Tuesday was near to their previous season’s team where they won ten in a row. On the other hand, the SKN Patriots picked the most balanced XI in the first match from the available squad.